I’d have quit. And gone home.

Since the last couple of days, the sun has been blazing down on us in Seoul and it is becoming unbearably hot. I watched the temperature rise from the pleasant 26 degrees with soft mornings and breezy evenings to now 34 degrees when the air feels like it has its clammy fingers wrapped around our necks. Every other day, there’s an ‘Emergency Alert’ text message on the phone warning us about a heat wave, asking us to stay indoors and hydrated.

And yet, I thought, how hot could it be? When I tell people I am from India, they say, “Isn’t it hotter there?” Much hotter, I say. “Then this should feel nothing!“, they say. So I left the house one day with a sketchbook and pen and headed towards Bukchon Hanok Village. 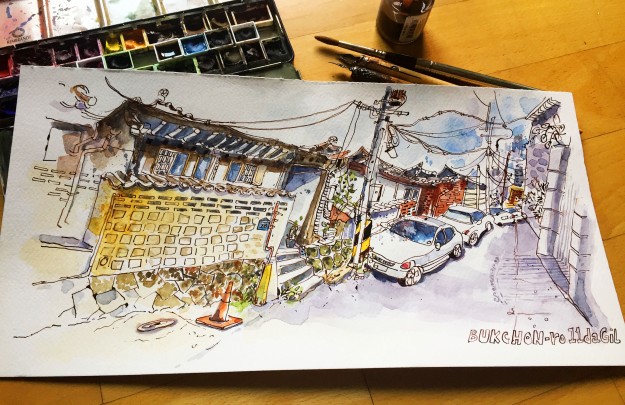 When I reached Anguk station it was already 2 in the afternoon. The roads were empty except for construction workers and few lobster red tourists walking doggedly with a map of Bukchon in one hand and a hand fan in another.

Completely disoriented by the blinding sun and blistering heat, I decided to fold away my own map and follow them. But they – a group of three women and I should’ve known – led me to a souvenir stall first, then to an ice cream shop and finally to a jewellery store where I abandoned them and decided to take matters into my own two hopelessly clammy hands.

For a person who doesn’t sweat easily, I was melting like a candle and it wasn’t a pretty sight. 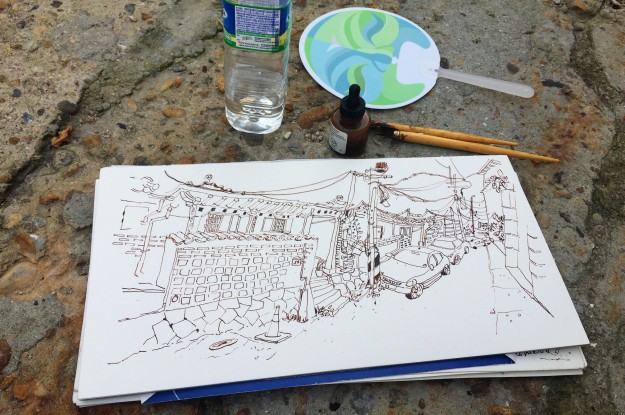 Sketching with the help of water, a hand fan and a toothless grandma by my side

Bless the kind staff of Emart, where I went in purely for the air-conditioning but pretended to closely inspect melons, for giving me directions to Bukchon. “..keep going straight and turn left. Just 5 mins.”, they said. I bought bottles of mineral water to show my appreciation. Melons were expensive.

So once again, I was on the road, in the furnace, but this time with dry armpits. And while that lasted, I managed to find myself a spot in the shade on this quiet alley called Bukchon-ro 11da-gil. 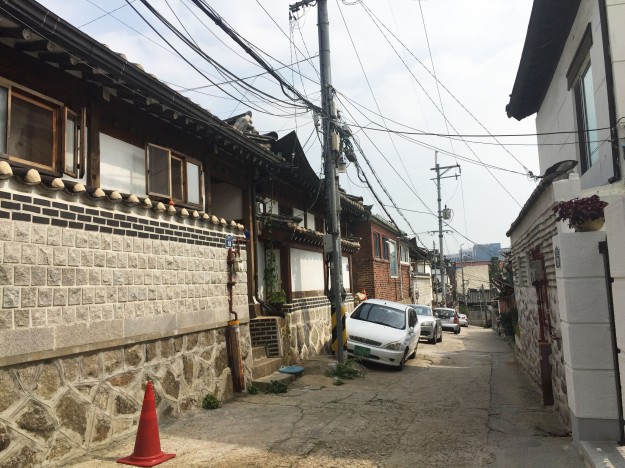 Travelers who haven’t visited Seoul yet may already have seen pictures of Bukchon Hanok Village on every guidebook, magazine and internet article describing Seoul. This area has a large cluster of hanok or traditional Korean wooden houses dating from the Joseon dynasty. These houses are not only picturesque but have been so beautifully preserved that a stroll down the narrow winding alleys they are lined with may well feel like time travel, especially if you arrive at an ungodly hour like I did and get the place entirely to yourself sans selfie sticks. Wouldn’t that be something?

It was. I hardly saw anything or anyone for the entire hour I sat on this street corner sketching except two stray cats, an SUV and the distant figure of a person hobbling in my direction. It was easy to imagine what a 600 years old office rush hour would look like –  noblemen and high ranking government officials emerging out of these houses while adjusting their elegant silk court uniforms and hurrying towards the royal palace – but my brain cells were too dehydrated to carry on with the mental imagery. 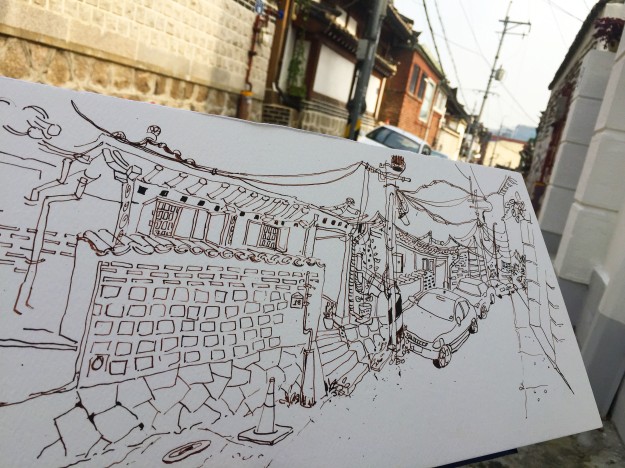 The air was still. And clingy. There was no respite even in the shade. The thought of quitting clouded my vision such that I lost sight of the lone approaching figure that was now standing behind me. Dressed in a lemon yellow floral patterned dress was this slightly bent, excessively wrinkled toothless grandma looking intently at the sketchbook on my lap and then matching my drawing with the scene in front. With a nod of her head she asks me to go on.

“Umm..no, see it’s too hot. I was leaving..“, I say to her pretending to pack up but she keeps nodding and pointing to my dip pen. She doesn’t understand a word I’m saying. Sigh! I feel like the performer who’s obligated to perform because one person showed up.

But sometimes that one person is plenty, if they care. So I start again. Grandma leans over with interest or to compensate for her failing eyesight. More nodding. And smiling. She looks pleased. So I keep going like a 5 year old being watched while she finishes her school homework. Grandma sticks by me, sometimes pointing out features I missed drawing or decided to overlook. A stickler for details, this one.

When I finish the drawing I was giving up on a while back, she was still there grinning ear to ear. I could see her gums.

Romanesque architecture is the last thing you would expect to chance upon in metropolitan Seoul. But emerge out of exit 5 of the City Hall station, turn left on Sejong-daero 19-gil and there it is in its massive thick walled, round arched and decorative arcaded entirety.

If not for one of the local artists who insisted upon taking me there, I would’ve given Seoul Anglican Cathedral a pass. After drawing inside the adjacent Deoksugung Palace followed by a scrumptious bowl of Bibim Naengmyeon (Spicy cold noodles) for lunch, I was ready to wind down. 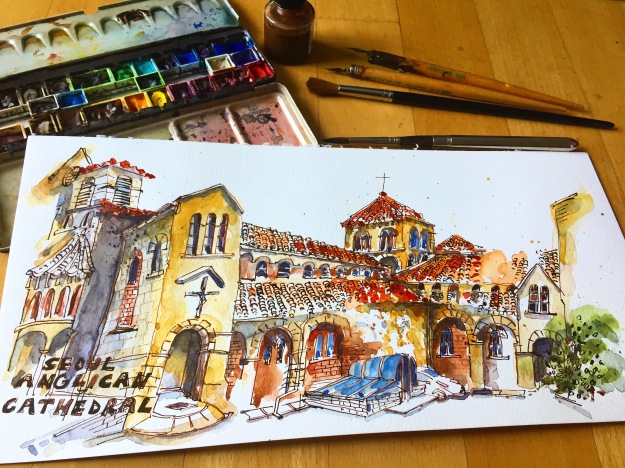 “But I take all my foreign artist-friends there…this place is…Oh!you must see it.“, pleaded my friend who could easily be two decades my senior but her enthusiasm showed no sign of waning in the soporific summer heat.  If I was a wilting flower in the vase by the window, she was the sprinkle of cold water on my face.

I was revived, momentarily.

“Let’s go..but I won’t stay long, okay?” I said to a figure that had left my side, hurried into a cafe on the cathedral grounds and was now paying for two cold coffees. “You know, the cafe owner escaped from North Korea and is now making a living here. “, she said, handing me a cup.

But I wasn’t listening. I was looking around and wondering if we got teleported. 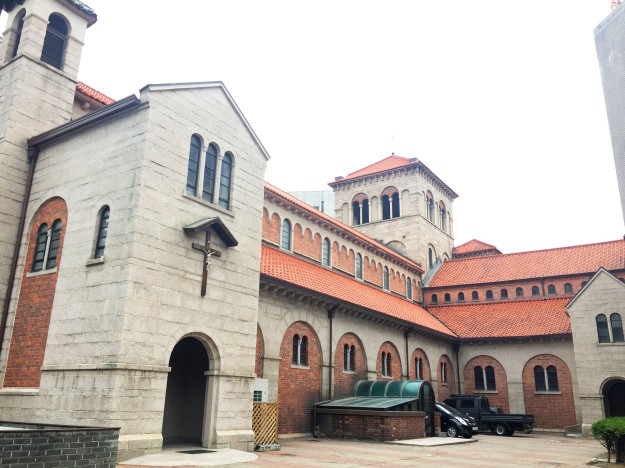 Only a minute ago we were trundling towards the cathedral past tourists, a construction site and a bunch of former President Park’s supporters waving flags and rallying for her release. Tall glistening office buildings closed in from all sides and the din of traffic on a muggy Saturday morning felt omnipresent.

And yet in the blink of an eye here we were, standing in the quiet shadow of a 20th century brick and granite structure with a manicured garden.

“I’ve drawn this a million times.”, said my friend. I could already see her trained hand forming a rough outline of the cathedral on her sketchbook with a water soluble crayon. She was in the zone while my eyes were glued to the information leaflet I had picked up.

Sketch of the cathedral using dip pen and ink

Interestingly, the cathedral’s construction started in 1922, during the Japanese occupation of Korea but due to financial constraints it couldn’t be completed as per it’s British architect, Arthur Dixon’s original cruciform design.

The transepts on either side and the nave had to be scaled back and the building remained incomplete until, and here’s the fun part, a British Museum worker visited the cathedral in 1993, found that the architect was Dixon, travelled all the way to England to locate the blueprints which he found in the museum archives and returned them to the Parish office in Seoul. Expansion started in 1994, and the cathedral was finally completed in 1996, 74 years later.

Happy ending, right? Mine was too. I decided to stay a while longer and sketch.