A year and a half back when we moved to Seoul and found an apartment in the Gangnam area, my first instinct was to explore the neighbourhood.

Every day after finishing work, not knowing where to head exactly, I picked a random road and kept walking on it until my legs hurt while taking everything in. And if something caught my eye I  stopped and took a few minutes to examine it, like the vending machine for flower bouquets I once stumbled upon by the roadside.

A standalone booth with multiple glass panels displaying a collection of flower bouquets  was something I had never seen before! Or the mobile tarot card reader conducting business from a lurid pink truck. I still remember being amused by the life-size Statue of Liberty replica outside Gangnam station’s exit 11, looking as much out of place as the mom-and-pop kimbap (korean sushi roll) stall beside it, both dwarfed by shiny hi-rises, plush hotels, designer boutiques, clothing retailers, cosmetic surgery clinics and cafes!

It took me a walk or two to realize how ubiquitous cafes are in Korea! They seemed to be everywhere, hidden in basements, inside shopping malls, museums, subway stations, on rooftops, under office buildings, along narrow alleys, and on bridges even. An article published in Korean Herald in March 2017 says Korea has the world’s fourth largest number of Starbucks coffee stores in relation to its population.

In the evenings, I found people gathering in front of food trucks lined in the back alleys selling barbecued meat on skewers, corndogs, teokbokki (rice cakes in hot and spicy red pepper sauce) and Odeng (fish cake on skewers served with hot broth) or making a beeline for the numerous Dak-galbi (spicy stir fried chicken), Korean barbecue and fried chicken joints.

In hindsight, not having a destination is sight was exactly what I needed to process my surroundings. I let curiosity fill the blank slate I arrived with to my neighbourhood with new impressions. Having lived in Seoul for a while now, I may not see everything with a fresh pair of eyes as I once did, but I still go on my walks, without a destination in mind and with a sketchbook in hand.

Because you never know what lies at the next corner.

Like the wondrous sight of streets covered with golden gingko leaves after a light shower. See the first sketch. On my recent walks from November to early December until it became too chilly to spend time outdoors, I observed my neighbourhood transitioning from fall to winter. Having lived on a tropical island for the last seven years and stuck with the same weather, the novelty of changing seasons isn’t going to wear off anytime soon.

And I find myself attuned to everything that enunciates this seasonal transition. From a guy furiously sweeping dry leaves off the sidewalk along Teheran-ro which is one of Seoul’s busiest roads to someone browsing winter jackets at ‘Vin Prime, the Vintage select shop’, I have them captured in the pages of my sketchbook. With the sudden drop in temperatures the mannequins at the shop windows of Gangnam’s local boutiques had changed their look too. In the drawing below, I sketched this girl checking out a bright red coat freshly displayed at Dalfactory and probably trying to find a reason to come back for it later! I know I would.

The last sketch is also of a scene observed on Teheran-ro which is lined with giant trees that were hurrying up and shedding their giant yellow leaves. What caught my eye was the caption on this guy’s sweatshirt. He was waiting for the traffic light to turn green and I was standing right behind him wondering if the hoodie looked like a shark’s jaw. 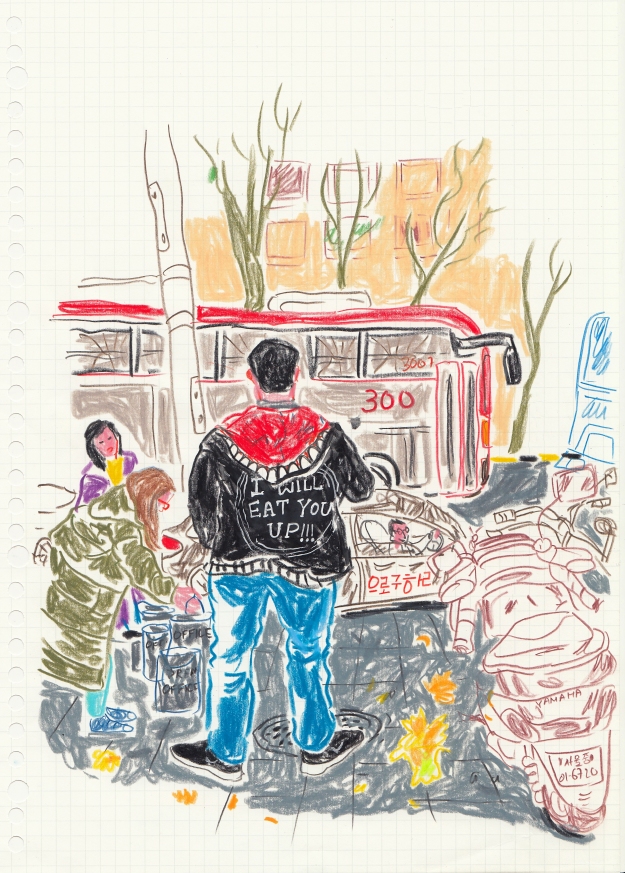 I’d have quit. And gone home.

Since the last couple of days, the sun has been blazing down on us in Seoul and it is becoming unbearably hot. I watched the temperature rise from the pleasant 26 degrees with soft mornings and breezy evenings to now 34 degrees when the air feels like it has its clammy fingers wrapped around our necks. Every other day, there’s an ‘Emergency Alert’ text message on the phone warning us about a heat wave, asking us to stay indoors and hydrated.

And yet, I thought, how hot could it be? When I tell people I am from India, they say, “Isn’t it hotter there?” Much hotter, I say. “Then this should feel nothing!“, they say. So I left the house one day with a sketchbook and pen and headed towards Bukchon Hanok Village.

When I reached Anguk station it was already 2 in the afternoon. The roads were empty except for construction workers and few lobster red tourists walking doggedly with a map of Bukchon in one hand and a hand fan in another.

Completely disoriented by the blinding sun and blistering heat, I decided to fold away my own map and follow them. But they – a group of three women and I should’ve known – led me to a souvenir stall first, then to an ice cream shop and finally to a jewellery store where I abandoned them and decided to take matters into my own two hopelessly clammy hands.

For a person who doesn’t sweat easily, I was melting like a candle and it wasn’t a pretty sight.

Sketching with the help of water, a hand fan and a toothless grandma by my side

Bless the kind staff of Emart, where I went in purely for the air-conditioning but pretended to closely inspect melons, for giving me directions to Bukchon. “..keep going straight and turn left. Just 5 mins.”, they said. I bought bottles of mineral water to show my appreciation. Melons were expensive.

So once again, I was on the road, in the furnace, but this time with dry armpits. And while that lasted, I managed to find myself a spot in the shade on this quiet alley called Bukchon-ro 11da-gil.

Travelers who haven’t visited Seoul yet may already have seen pictures of Bukchon Hanok Village on every guidebook, magazine and internet article describing Seoul. This area has a large cluster of hanok or traditional Korean wooden houses dating from the Joseon dynasty. These houses are not only picturesque but have been so beautifully preserved that a stroll down the narrow winding alleys they are lined with may well feel like time travel, especially if you arrive at an ungodly hour like I did and get the place entirely to yourself sans selfie sticks. Wouldn’t that be something?

It was. I hardly saw anything or anyone for the entire hour I sat on this street corner sketching except two stray cats, an SUV and the distant figure of a person hobbling in my direction. It was easy to imagine what a 600 years old office rush hour would look like –  noblemen and high ranking government officials emerging out of these houses while adjusting their elegant silk court uniforms and hurrying towards the royal palace – but my brain cells were too dehydrated to carry on with the mental imagery.

The air was still. And clingy. There was no respite even in the shade. The thought of quitting clouded my vision such that I lost sight of the lone approaching figure that was now standing behind me. Dressed in a lemon yellow floral patterned dress was this slightly bent, excessively wrinkled toothless grandma looking intently at the sketchbook on my lap and then matching my drawing with the scene in front. With a nod of her head she asks me to go on.

“Umm..no, see it’s too hot. I was leaving..“, I say to her pretending to pack up but she keeps nodding and pointing to my dip pen. She doesn’t understand a word I’m saying. Sigh! I feel like the performer who’s obligated to perform because one person showed up.

But sometimes that one person is plenty, if they care. So I start again. Grandma leans over with interest or to compensate for her failing eyesight. More nodding. And smiling. She looks pleased. So I keep going like a 5 year old being watched while she finishes her school homework. Grandma sticks by me, sometimes pointing out features I missed drawing or decided to overlook. A stickler for details, this one.

When I finish the drawing I was giving up on a while back, she was still there grinning ear to ear. I could see her gums.

told me there was going to be a parade.

I am the kind of a person who likes to be prepared. Wikipedia, Google maps, subway routes and the weather app – all had been read and consulted with before I got here, inside Deoksugung Palace, one of Seoul’s four royal palaces to sketch with a bunch of local artists.

Then how did I skip the part about this parade? An oversight perhaps. All I know is finding a gaping hole in my pre-trip research, something I am a self-confessed expert of had taken the wind out of my sails was a wee bit soul crushing.

“It’s the changing of guards ceremony. Happens thrice a day…here they come“, she offered kindly, mistaking incredulity for curiosity. Wedged between her body and her thin arm was a fat Japanese guidebook on Korea.

I could already hear the drums and the sound of marching footsteps round the corner. Grabbing a bench facing the mighty Junghwamun – the inner palace gate leading to the main throne hall – I quickly laid out my sketching gear and waited with a dip pen and a bottle of ink in hand. The Japanese tourist had her phone propped up with a selfie stick and was standing by the road, also waiting. You can see her in my sketch.

As the sightly procession of uniformed guards carrying colourful flags passed us by, we captured the event in our own way.

Before leaving she asked me if I was a tourist too and though I still feel like one, I found myself savouring the fact that I wasn’t and therefore could visit this palace and watch this ceremony as many times as I wanted.

What was even more uplifting was when I reached inside by bag and touched the reassuring crook handle of my umbrella. “Wasn’t it supposed to…”.

After several balmy days, it had rained very heavily that day.