Romanesque architecture is the last thing you would expect to chance upon in metropolitan Seoul. But emerge out of exit 5 of the City Hall station, turn left on Sejong-daero 19-gil and there it is in its massive thick walled, round arched and decorative arcaded entirety.

If not for one of the local artists who insisted upon taking me there, I would’ve given Seoul Anglican Cathedral a pass. After drawing inside the adjacent Deoksugung Palace followed by a scrumptious bowl of Bibim Naengmyeon (Spicy cold noodles) for lunch, I was ready to wind down.

“But I take all my foreign artist-friends there…this place is…Oh!you must see it.“, pleaded my friend who could easily be two decades my senior but her enthusiasm showed no sign of waning in the soporific summer heat.  If I was a wilting flower in the vase by the window, she was the sprinkle of cold water on my face.

I was revived, momentarily.

“Let’s go..but I won’t stay long, okay?” I said to a figure that had left my side, hurried into a cafe on the cathedral grounds and was now paying for two cold coffees. “You know, the cafe owner escaped from North Korea and is now making a living here. “, she said, handing me a cup.

But I wasn’t listening. I was looking around and wondering if we got teleported.

Only a minute ago we were trundling towards the cathedral past tourists, a construction site and a bunch of former President Park’s supporters waving flags and rallying for her release. Tall glistening office buildings closed in from all sides and the din of traffic on a muggy Saturday morning felt omnipresent.

And yet in the blink of an eye here we were, standing in the quiet shadow of a 20th century brick and granite structure with a manicured garden.

“I’ve drawn this a million times.”, said my friend. I could already see her trained hand forming a rough outline of the cathedral on her sketchbook with a water soluble crayon. She was in the zone while my eyes were glued to the information leaflet I had picked up. 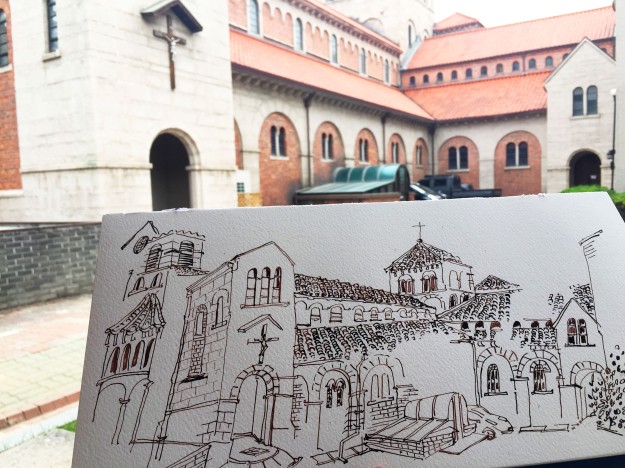 Sketch of the cathedral using dip pen and ink

Interestingly, the cathedral’s construction started in 1922, during the Japanese occupation of Korea but due to financial constraints it couldn’t be completed as per it’s British architect, Arthur Dixon’s original cruciform design.

The transepts on either side and the nave had to be scaled back and the building remained incomplete until, and here’s the fun part, a British Museum worker visited the cathedral in 1993, found that the architect was Dixon, travelled all the way to England to locate the blueprints which he found in the museum archives and returned them to the Parish office in Seoul. Expansion started in 1994, and the cathedral was finally completed in 1996, 74 years later.

Happy ending, right? Mine was too. I decided to stay a while longer and sketch.