“I am Karna”, said a voice on my right. Since I didn’t look up from my sketchbook, he said, “You know Karna, the warrior prince from Mahabharata? ”. When I am sketching in crowded public spaces, I am used to people peering over me, breathing over my neck, appraising my work like art connoisseurs, pointing cameras to my face, nudging friends to take a look, but rarely does one talk to me while I am working, except slipping in a few words of encouragement when they leave, to which I nod or smile in bashful acknowledgement.

But not Karna, the warrior prince from Mahabharata. He wanted to butt right in. 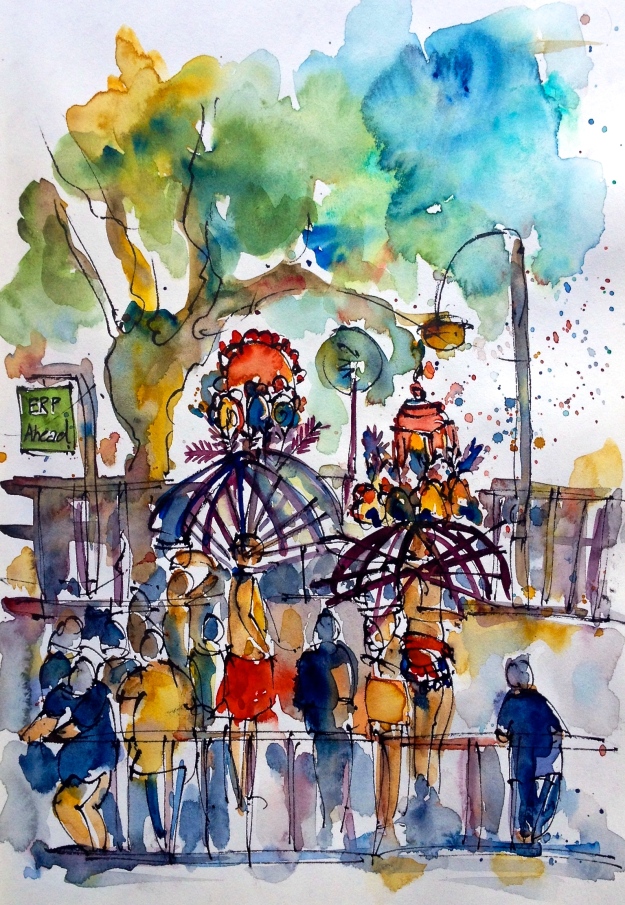 His gigantic frame in an untucked white pinstripe shirt and loose trousers leaned against the yellow barricade and faced me. A mop of dark curls, slick and shining with oil was pushed back; round dancing eyes like two pingpong balls smiled under the shade of bushy eyebrows and an inch wide moustache revealed the largest, whitest pearls I had seen in a long time.  ’The skill you have there’, he said pointing to my sketches and folding his hands and looking heavenwards, ‘is God’s gift’. He scrunched up his eyebrows such that the long tilak on his forehead disappeared between the folds. First time in my four year stay in Singapore, when I finally mustered the courage to watch Thaipusam – a Hindu festival celebrated by Tamils by honouring Lord Murugan –  up close, I was victim of small talk. 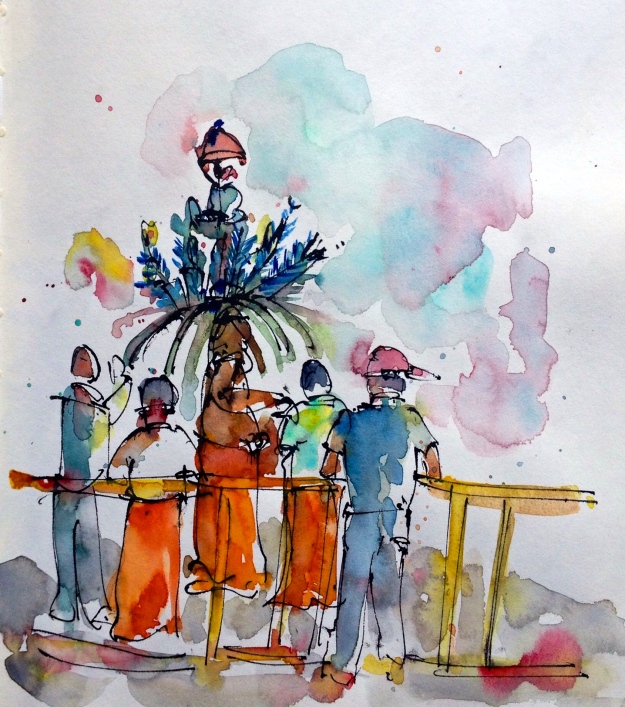 But, when you’re on foreign soil and want to make sense of the place, it isn’t a bad idea to indulge local voices to tell you their stories, from their perspective, laced with their sentiments. I didn’t want to kill the story yet, if there was one. So waving at the pilgrims, I asked Karna, a question that was on the top of my mind, “Aren’t they in pain?”.  There was no blood, it was hard to tell.
“When you fast and pray for 48 days, your body is prepared to endure such pain”, said Karna,  slightly irked at the mushy overtones. But for the uninitiated, Thaipusam is extreme. Thaipusam isn’t for the faint hearted. Even the befuddled spectator needs to keep her nerves. The sight of these men, regular men – perhaps one of them is your office colleague, your school teacher, a neighbourhood grocer – turn into a pincushion overnight, with scores of metal skewers fastened to their chest and back, one going right through the cheek or tongue, a gigantic, elaborately decorated canopy balanced on the head will elicit the question I just asked.
But bearing a kavadi or physical burden by undertaking such painful ventures is how one expresses gratitude to Lord Murugan, the god of war and victory. “In return the god, protects you from misfortune.” says Karna.  As each devotee passed by, I searched his eyes for signs of exhaustion, discomfort, resignation. All I got was a misplaced sense of calm. 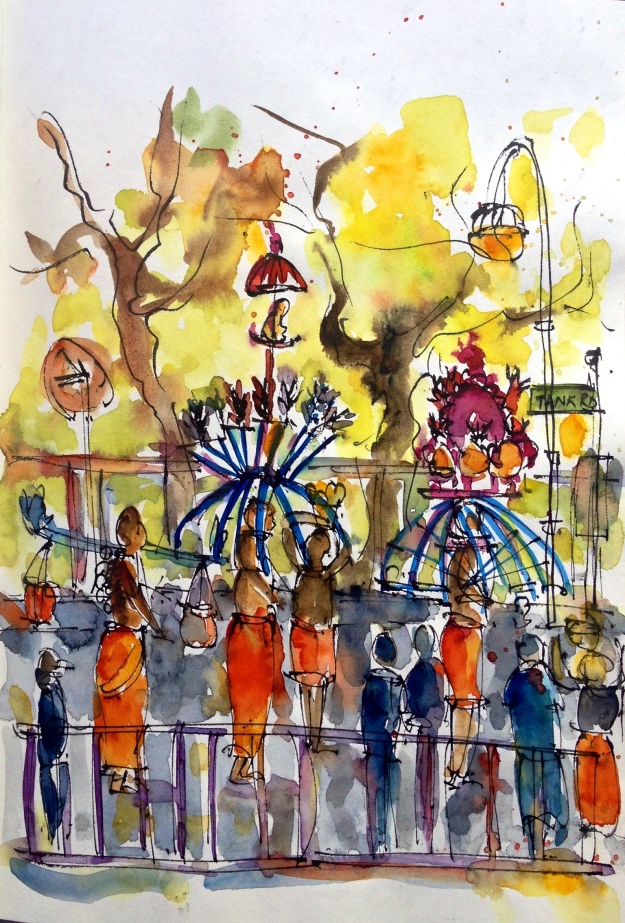 Devotees approaching Tank Road and the supporters are cheering them on, singing religious songs and clapping

I had joined the procession midway on foot from Dhoby Ghaut station, and reached Tank Road, where they were slowing their march and queuing up to enter the Sri Thendayuthapani Temple, which would terminate their 4.5 km trek from Sri Srinivasa Perumal Temple in Little India. Canary yellow barricades had been laid on roads directing the devotees and separating them from the curious spectators, omnipresent photographers and culture-shocked tourists. Volunteers were directing people at road crossings with urgency and handing out water in plastic cups and food from capacious tents pitched along the road, to exhausted participants and their families who were walking with them, cheering them on, singing religious hymns to drum beats. The police were calm and observant from their posts. 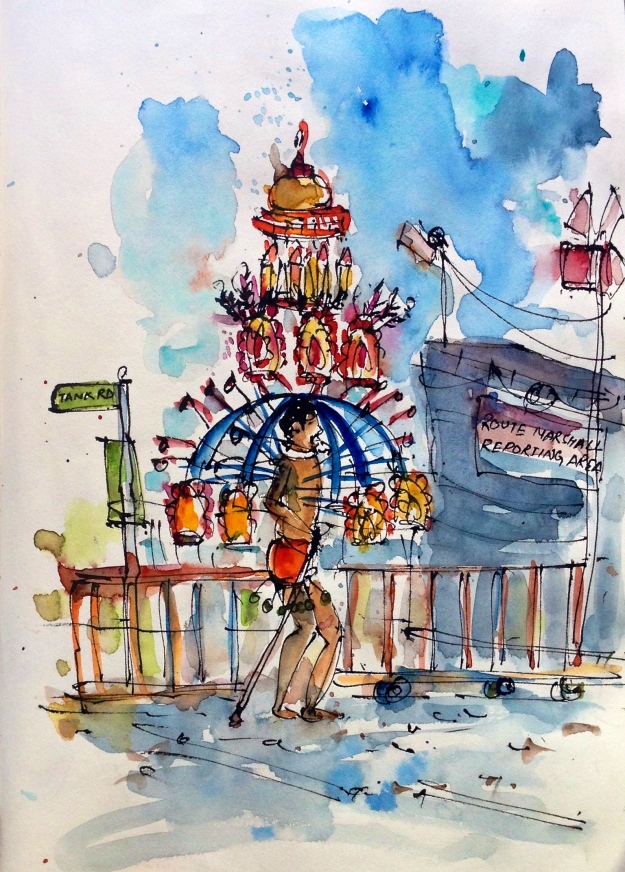 Some kavadis are flower and peacock feather embellished wooden structures with arched metal frames that are supported by skewers hooked to the chest and back of the bearers.

‘It wasn’t like this before, you know’, said Karna, when a group of devotees slowed before us, offering a close up. A bunch of supporters, perhaps friends and relatives circled a thickly skewered and canopied man and broke into a perky devotional song, clapping their hands animatedly. The man started swinging and swaying to the chants along with his kavadi. The ankle bells tied to his feet tinkled. The energy was palpable. I don’t understand a word of Tamil but my feet didn’t need to. They were tapping on their own.
“Even a few years ago, there was much greater fanfare and spirit; now there are too many restrictions on what you can and cannot do”, said Karna, reminiscing. “ The music used to be so loud, it would ring in your ears long after you left.” 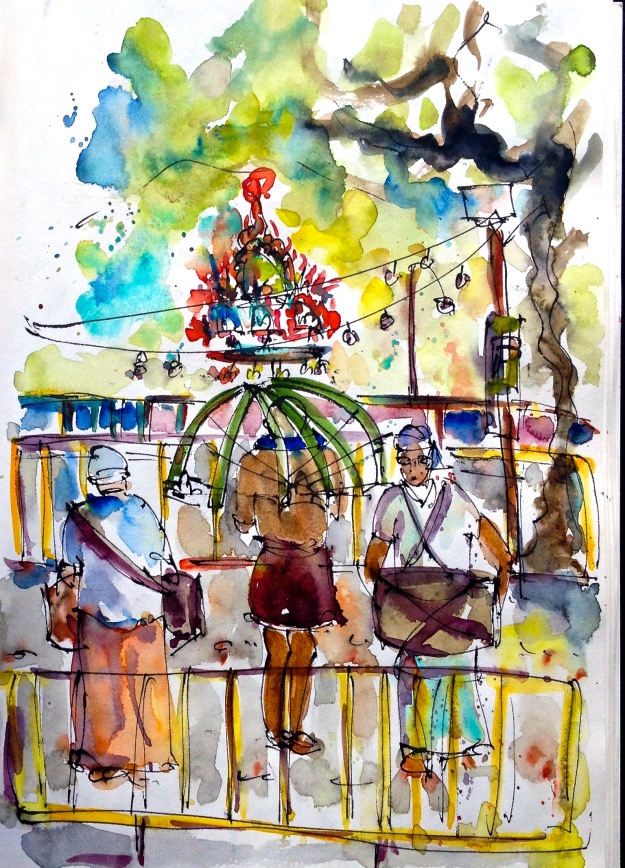 A kavadi bearer, swinging to the beat of drums

I was frantically sketching, trying to capture the guy with at least three dozen lemons hooked to his back, quickly outlining the exhausted drummers catching a breather and getting the many kavadi bearers balancing a gigantic mass of flowers, peacock feathers, folded metals and sharp skewers down on paper. The jubilant yet awestruck crowd guarding the fanfare made the scene complete. There was almost a kilometre long wait to enter the temple and at having their subjects come to a halt, the photographers went delirious. 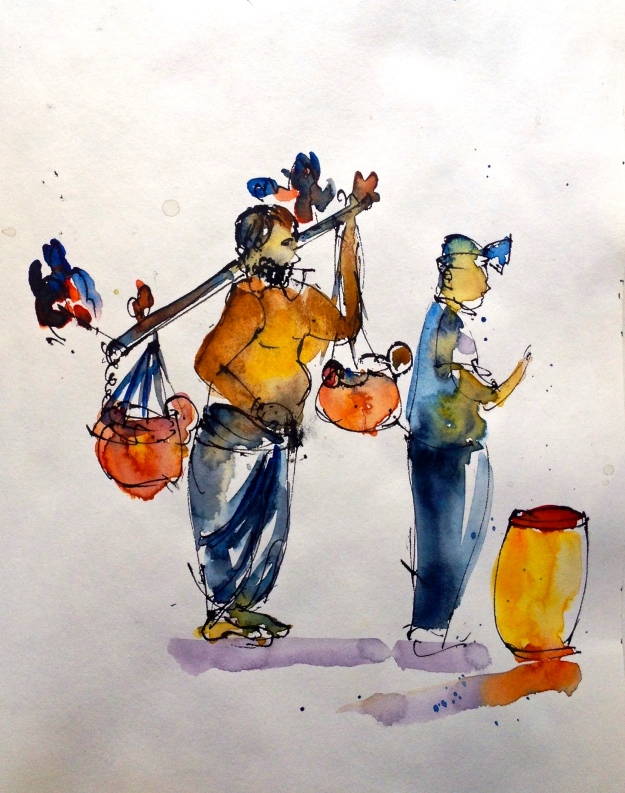 A not-so-extreme kavadi of milk pots balanced on a wooden rod. He still has his tongue pierced.

Few steps away from the temple door, decorated with banana leaves, a pilgrim was approaching with his kavadi on two wheels. It looked like a wooden toy chariot. The steel skewers hooked to his back flexed under the load and stretched his skin, while he negotiated a bump on the uneven stretch. Standing on the sides, we clenched our fists and held our breath. The remaining few steps would end his arduous yet spiritual journey. He tilted his head, arched his back and pumped his chest. Then he pulled hard. The sidekicks cheered him as loudly as they could, their heave-hos bold and distinct, but the kavadi slumped back. Others glided past him with no trouble. Some people have a bumpy ride till the end. Or perhaps he’d asked for a much bigger favour. 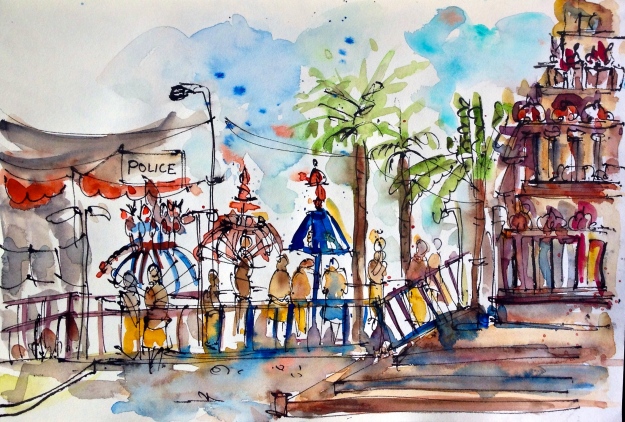 Pilgrims exiting the temple, freshly relieved from their kavadis, seemed visibly transformed – smiling and spirited – with only red holes on their body – that they were now proudly flaunting as a proof of their penance.
Karna didn’t accompany me till the end. In fact, midway through our conversation, he abruptly shook hands, wished me luck and left me alone to experience the festival and make my own stories. When I reached home, the songs, the chanting, the drum beats and fervent clapping were still ringing in my ears. I think Karna would’ve approved.
Advertisement