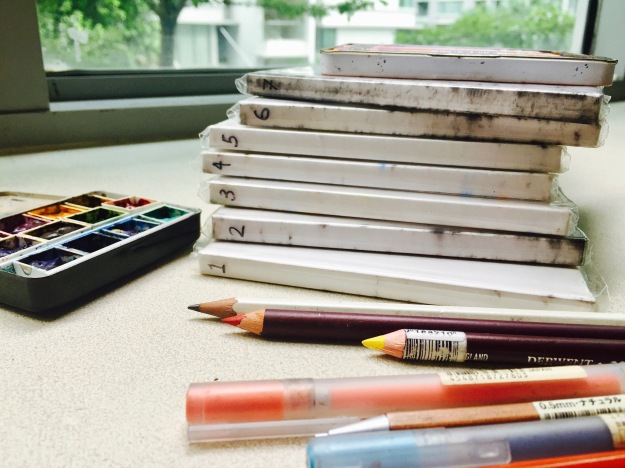 when I crack open the eighth, run my fingers across the first white page and prepare to draw the man sipping coffee next to me I still freeze.

I recoil. I do not want the sketchbook to spoil. But the voice in my head says, start.

Start even when you are filled with hesitation and packed to the gills with self doubt.

Start because you’ve done it many, many times.

Start because once you start it’ll come to you. Start anyway.

And when I start, put pencil to paper, it’s a breeze.

Seven sketchbooks later I still wonder if it’s any good. What should I be doing?

Keep going because it doesn’t matter what others think.

So I pick up a crayon and colour the man’s coffee mug pink! And chuckle.

Seven sketchbooks later I still have as much fun as I did when I was drawing in my first. But can I make it last?

You want to keep having a blast? the voice is amused, perhaps at my avaricious scheme to hoard the riches of creativity.

But such riches are boundless and for anyone to grab, I yell.

Well, that’s swell, says the voice and offers the last tip – experiment, improvise, take risks and y’know, mix it up a little!

give it your best – every jot and tittle. 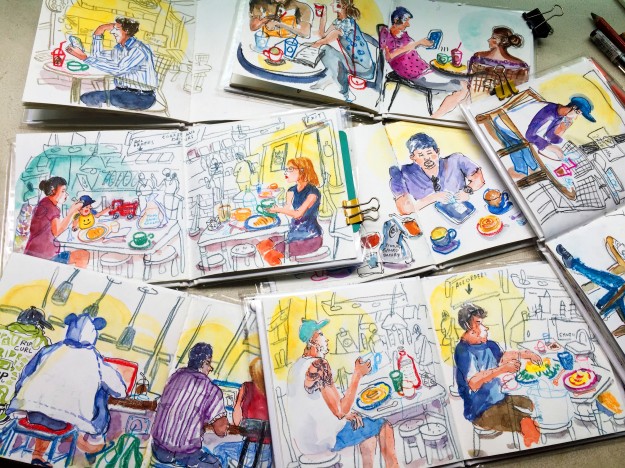 I use Muji sketchbooks for sketching people. They are small, lightweight, square shaped and can take water colour well. Oh and cheap too!

And that’s what I’ve been doing. I now have 7 sketchbooks filled cover to cover with sketches of people who I see around me everyday at cafes, restaurants and in the subway. It’s not a big number but it is something considering how afraid and hesitant I was when it came to drawing people an year ago. Several times, especially when the drawing didn’t go my way and was cringeworthy beyond measure, I second guessed myself and wanted to give up. I still do.

But as trite as it may sound, something kept me going, rather keeps me going. The voice in the head is real. It is born out of doggedness. Besides having fun which is primarily why I draw people and everything else, to observe and to document that on the spot, in that very moment feels like actively participating in my own life. Here’s hoping the feeling never goes away!

Below are sketches from my 7th sketchbook. The last sketch in the series is also the very last one I made in Singapore before leaving the country two months ago.  Enjoy! 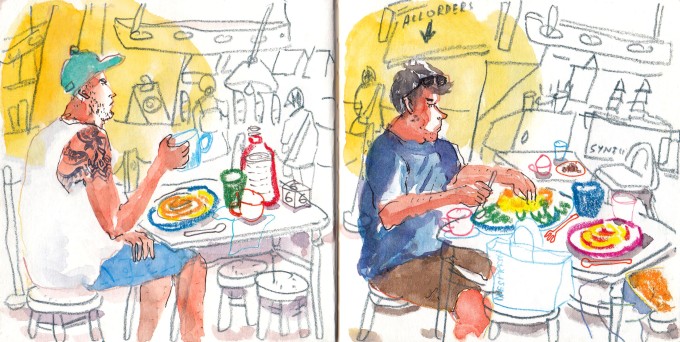 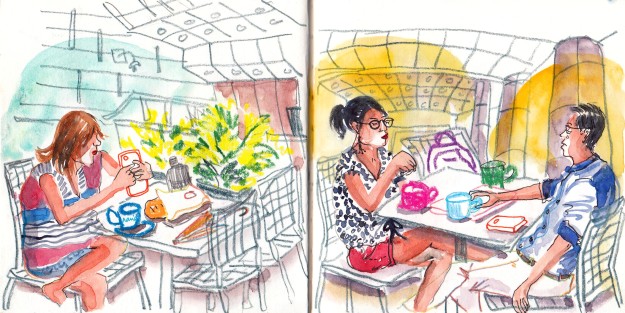 People at Hanis Cafe, outside the National Library of Singapore, my absolute fav place to go.

Sketched the lady on the left over a bowl of rich and creamy lobster bisque at Soup Stock Tokyo in Singapore. She was waiting for her food. There was no slouching! 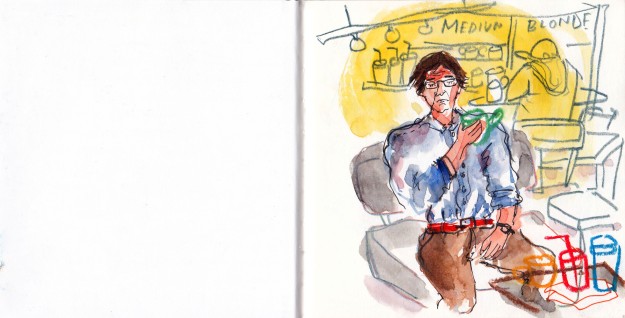 A lonely guy seen at Starbucks who kept looking at people very longingly, perhaps waiting for someone to fill the seat opposite him.

Lobster red French tourists on the right were sitting at the next table at Tiong Bahru Bakery (TBB) in Singapore. They were pretty amused to see me sketching them.

On the left is a Caucasian dad tending to his very cute half Caucasian-half Asian child. Also seen at TBB. 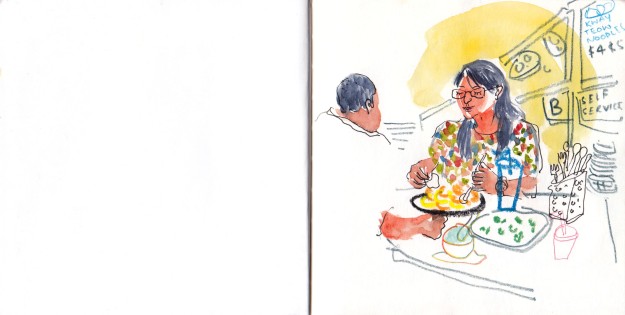 Guy on the left reading Financial Times and the lady on the right in gym clothes reading a book on kindle and forgetting to eat. Both seen at TBB, Singapore

Started drawing the guy on the left because he had ordered a lot of food. I thought he’d stay put for long giving me enough time to finish drawing. But he was acutely hungry, finished everything in seconds and left!

Starbucks patrons drawn on a depressing Sunday night (because next day was Monday, duh!)

Ladies on the right – One ate voraciously and the other looked expectedly. Seen at TBB, Singapore

Couple on the right was sitting at the table of superlatives. The lady had the longest nose and the gentleman had the narrowest chin in the entire cafe. They were having coffee together at TBB.

View from my table at our neighbourhood Starbucks in Singapore. It is heartening to see kids holding actual books and reading! Such are our times.

Seen at Tiong Bahru Bakery, Singapore. The cafe was 5 kms away from our apartment. We walked there every Sunday morning for a whole year. I drew and my husband read.

The lady on the right was straight as a ramrod. Hardly get to see such perfect posture! Drawn at TBB, Singapore

Just some people eating at Newton Food Centre in Singapore. I went there  often for the excellent meatball noodles. 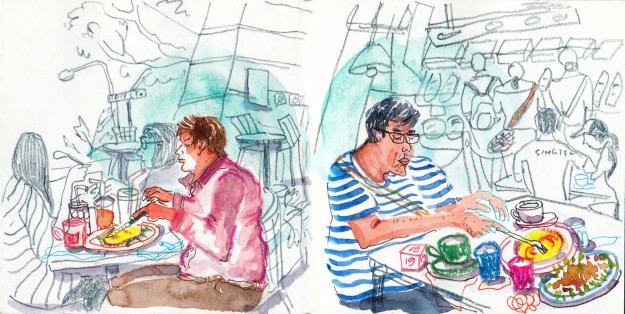 Ladies on the left were part of the lunch crowd at Hanis Cafe near the fantastic National Library of Singapore. They were having fish and chips with Ice tea. It was a breezy afternoon, only a few days before I left the country. 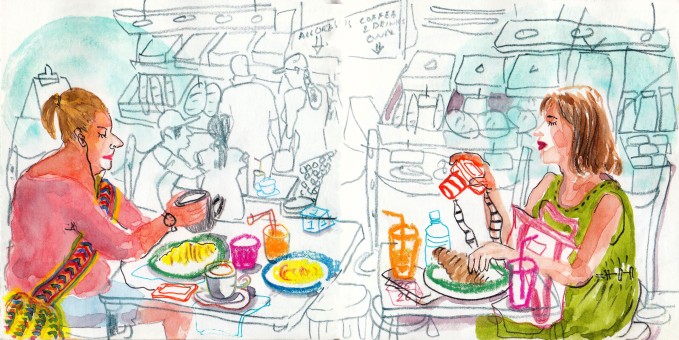 Lady on the left had a remarkably colourful woven bag that I instantly coveted. The next best thing was to draw the bag and the owner. The lady on the right was dutifully photographing her food before eating because, Instagram. 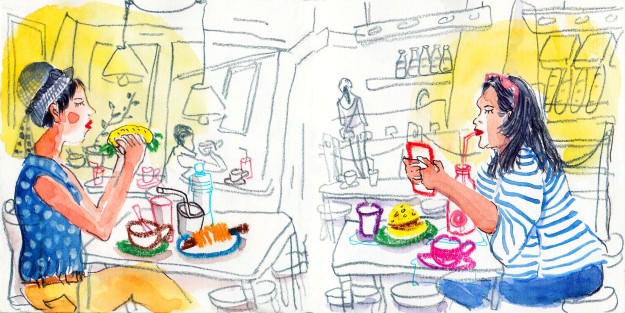 Lady on the right was the last person I sketched before leaving Singapore. Seen at Tiong Bahru Bakery.