and I got to sketch it the other day when I was in the neighbourhood. 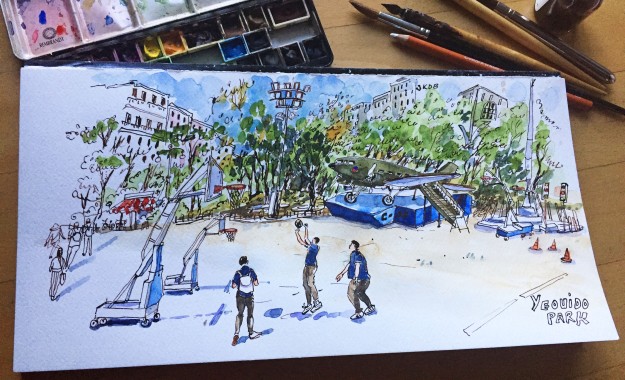 To celebrate the 70th anniversary of Korea’s liberation from the Japanese rule, a transport military aircraft called Douglas C 47 skytrain was put on display in Yeouido Park on August 18th 2015 for 3 years. How lucky are we to have our visit coincide with the display of such a unique exhibit?

I had been eyeing it with absolute wonder on my long afternoon walks in the park for the whole month of March, when we stayed in the nearby Glad Hotel immediately after moving to Seoul. It stood out even more then because the park was barren. Waking up from the grey winter, the trees were skeletal and people were scarce, except during lunch hour when they would emerge in hordes from the nearby office buildings wrapped in coats and scarves to get fresh air and stretch their legs in the park.

Three months hence, the scene is different. The park is bathed in sunshine and the myriad shades of green on the trees contrast the aquamarine sky with pillowy clouds floating in it. I see gleeful children shrieking with joy while racing each other around the blue platform on which the C47 is proudly standing, followed by teenage boys and girls rollerblading hand in hand. About 20 meters away, a bunch of school boys in uniform are shooting hoops. Don’t miss the portable basketball goals in the sketch! They are scattered all over the asphalt pavement of the park. 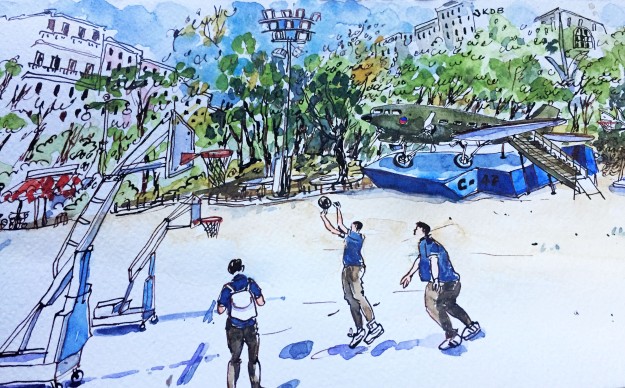 What’s special about this military aircraft on display is that it’s identical to the one in which 15 members of the Korean provincial government flew home from Shanghai in 1945 to land at the Yeouido airport (now Yeouido Park). The provincial government of Korea founded in 1919 in Shanghai was operating as an interim government-in-exile to gain independence from the Japanese rule (1910-1945).

As you can see in my sketch, the display aircraft has a flight of stairs attached to it for visitors to climb inside and explore its interiors. Unfortunately it was closed when I was there earlier this week but fortunately I have time until 2018.