in a dusty cobblestoned alley in Santorini, a Greek island in the Aegean sea, I had tasted the most scrumptious dish of my life – Lemon chicken with chunky potatoes served in a chipped plate with roughly sliced bread on the side.

The taverna which had served this dish had an old wizened look about it that you see on places and people that have been around for a while and therefore know their shtick better than anybody. While that itself was a comforting thought, what really pulled me towards it was the picture its pretty teal coloured windows framed inside them. The picture of conviviality, warmth, love and a look of utter contentment on the faces of its diners that only good, homely food can bring at the end of a long day.

Trust me when I say that I am salivating as I write about my first bite of that buttery soft chicken doused in a light lemony sauce perfumed with garlic and oregano. 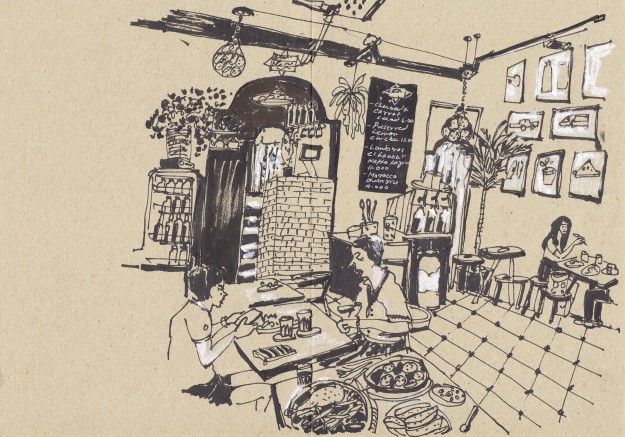 It was a gustatory experience like no other and even though I’ve traveled far and wide since, nothing came close to what I had tasted and how I felt that one time in Greece until I visited Moroccan Cafe in the Itaewon neighbourhood of Seoul and had their Lemon chicken.

Except for the distinct flavour of cumin in the Moroccan version and few other minor variations, it was the same honest, fuss-free, homespun food served in an intimate environment.  The cafe has only 9 tables and 3 main courses which makes you feel as if you are dining in somebody’s home until of course the cheque arrives!

Before the food got cold and the floodgates for six year old memories opened and swept me away, I did my best to document this new inadvertent experience in the form of a quick sketch. If you’re in Seoul and had enough Korean bbq for a lifetime, give this place a go.