The title maybe beguiling but isn’t misleading I assure you. Here’s the story.

Right after returning from our trip to New York, we were hit with severe jet lag. Time difference had throttled our body clock. It was agonising to stay awake during the day and by night time we felt so alive and active that it was impossible to sleep. So to ease back into the GMT+08:00 time zone as quickly as possible we hatched a plan and decided to execute it immediately. Being the long new year weekend, timing was perfect and the idea was simple –  we must tire ourselves so much during the day that we’d just zonk out by nightfall. But how does one make that happen?

By taking very long walks to get our morning coffee.

Okay, hmm…but where could we go? Maybe to a cafe/bakery that opens really early and is far enough to warrant a long walk. Quick search on the internet revealed that Tiong Bahru Bakery on Eng Hoon Street is about 5kms from our house and if we set off slightly before 7 in the morning, we could be standing first in line when their door opens. Trust me, there is a line of eager beavers queuing up to grab a seat even before the door opens. 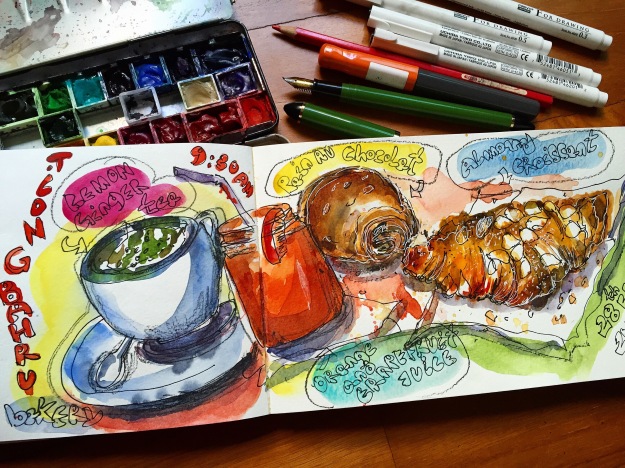 Some of the goodies at TBB

Besides solving the problem which it was designed for, the walk itself seemed enjoyable, more than we imagined because the two bugaboos – heat and humidity were missing from the equation. Save for the construction workers, a handful of buses, bicyclists and domestic helpers speeding towards Lucky Plaza to spend their day off, the roads were empty, the street lights were on, the sky was mellow and there was a breeze that blew our hair and dried our sweat when we climbed up an incline.

About 7000 steps later we pushed through the wooden door of Tiong Bahru Bakery where giddy with self approbation (and air-conditioning), we rewarded ourselves with sugary buttery treats to accompany the beverages. I wouldn’t mention how they fared because in Singapore, the city of gourmands, the queue for food does all the talking. And there was one snaking from the already house-full cafe’s entrance door till the cash counter which revealed how popular their goodies are with the locals and expats.

Suffice it to say that if you’ve eaten here once chances are you will come back, many more times. Unless we are out of the country, this is where we can be found every Sunday morning swirling in the glistening folds of a Kouign Amann or nestling inside the flaky comfort of an Almond Croissant. Because it was so enjoyable we started walking our way back home from the cafe, making the journey a total of 10kms which should’ve made it the most salubrious habit we ever nurtured if we didn’t know counting. But since we do, here’s the math – for every 500 calories we lose on the walk we pile on 1000 more from our cloying lapse in judgement making the count, you guessed it – plus five hundred. If there’s a lesson to be learnt from this mood dampening revelation it would be to never overthink when you’re having fun.

So naturally, the plus five hundred walks are very much on. Also, should jet lag strike again, we now have the perfect antidote.