Sometimes while doing the most inane tasks like staring at your toe nails for example, have you ever been stricken with a surge of creative energy that makes you feel you could do anything?

I have and before it fizzled out I rode with it and some sketching supplies on the subway to Hoehyeon station, emerged out of Exit 5 and walked straight into a noisy, overcrowded, confusing maze called Namdaemun Market, Korea’s largest traditional market with 600 years of history.

The first order of business was to orient myself and then locate a discreet corner from where I could sketch without being in the way of either the vendors or the shoppers. I got hopelessly lost instead which wasn’t exactly surprising considering I was a first time visitor to a market that has over 10,000 stores and is visited by 300,000 people a day. 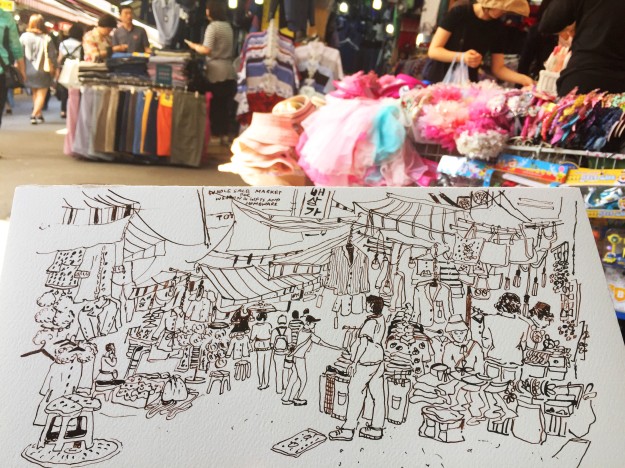 To give you a idea, here’s a list of the items I saw being sold on just one of the streets – hats (all kinds imaginable and more), fur coats, dried nuts, dumplings, spectacles, stone seals, eerie looking ginseng with their sinewy roots stored in clear glass jars and miles of kitchen utensils. I was beginning to believe in the saying that if you don’t find it in Namdaemun Market, you won’t find it anywhere in Seoul.

View from my corner on Fashion Street.

A map, which I had snagged from the tourist information centre in the meantime showed entire alleys and streets dedicated to cameras, bedding items, watches and jewellery, mountain climbing equipments, women’s, men’s and children’s clothing, stationaries and more.

When I spotted yards of army green stretched out in the form of military uniforms, T-shirts, caps, blankets, boots, sacks, compasses, watches and telescopes, I knew I had hit the ‘Military Uniform Street’ on my way back from the ‘Fish and Stew Alley’. Galchi jorim, or braised hairtail fish stew, one of Namdaemun Market’s famed food offerings along with Kalguksu (Korean knife-cut noodle soup) have to wait for my next visit. 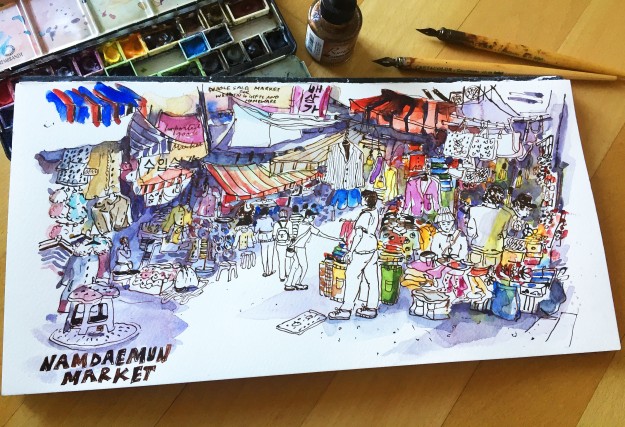 This visit was all about channeling my chance ebullience fuelled by the mood enhancing amino acid in my matcha latte for all I knew and perhaps the fact that I had been feeling pretty sketch-deprived lately. Seoul is still new to me. I don’t know the best spots to sketch from yet. Finding out can be fun but sometimes exhausting too when you just want to get down to business!

‘Fashion Street’ had one little corner squeezed in between a fur coat vendor, shirt, pants and coat seller and a shop selling pink and cutesy Mickey mouse themed merchandise from where I made this drawing. Tons of people came to look and showed various signs of appreciation though I didn’t understand a word they said. What I clearly did understand simply because some things transcend languages, was when fur coat vendor in his excitement dragged Mickey mouse lady by the arm to show how I had put her in my sketch and she self consciously touched her waist and said, “She made me look fat!” and marched off.