Few weeks ago I was having dinner with few of my sketching  pals when a friend pulled out some fortune cookies from his bag and passed them around. Now I am a very ‘if you want something you gotta work for it’ kind of person and do not wait for the stars to be in right allignment to act upon what needs to be acted upon but once in a while I do amuse myself with a light read of the horoscope in the daily newspaper.

The problem is, once the knowledge of how my day is going to pan out has been acquired, I use that intel to corroborate everything that happens from then on. For example, my inclination to take up a new language the other day was obviously because cafeastrology predicted that ‘..with the moon in your communications sector, dear Virgo, you tend to want to be ‘on the go’, making connections, learning ( and there’s our key word!) and sharing. Today the same column predicts that my ‘boredom threshold level’ is supposed to be very low which must explain my pillaging the larder and finishing a bag of garlic breads while watching Gilmore Girls. See, how this works? 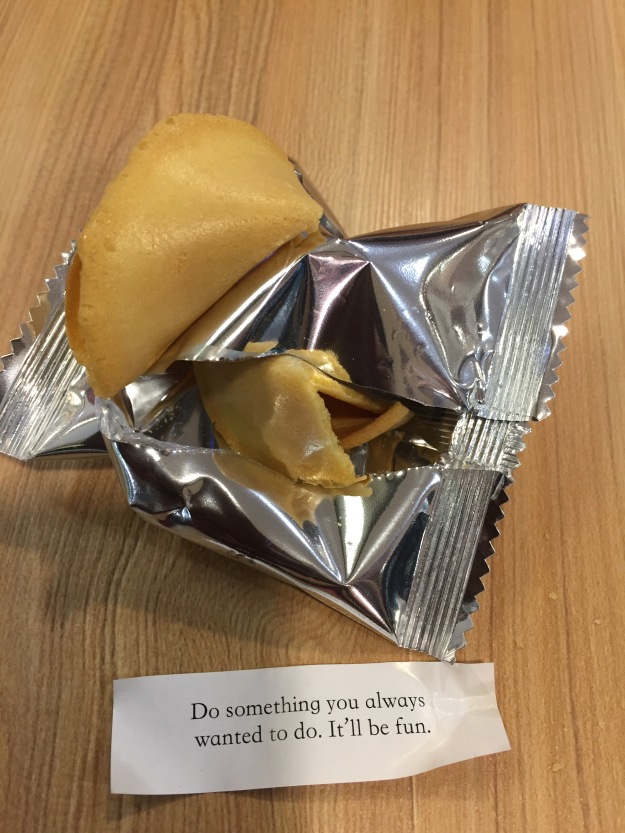 How could I have ignored such a potential life altering edict from a smart cookie like that? I couldn’t. So this happened a week ago –

Rarely do I get a chance to recycle an old illustration. I made the original last August when we visited Seoul as tourists. Little did we know that seven months later we’d move here.

Yes, we moved! And we are settling quite well, better than I imagined. Well, all that practice from before is coming in handy. Our first move was from Delhi to Munich and then from Munich to Singapore and now after seven years of expat life in the tropical city state, we’re here in the capital of South Korea, living in a nifty service apartment for now from the window of which I can smell spring which is just round the corner and can see the dome of the National Assembly building if I really crane my neck.

Aboard Singapore Airlines, flying to Seoul. The final goodbye was very painful but also looking forward to new beginnings.

The first week as expected of settling in at a new place has been predictably eventful. We got our tuberculosis tests done (required to apply for a residence permit) at a public health clinic where not a single soul spoke English.

Everything went remarkably well, considering we managed to fill out forms that were in Korean except for a little confusion towards the end when our names got swapped and my husband was asked to take the test again when they actually meant to ask me. But we handled it with all the charm we could muster. Never underestimate the power of miming. Grocery shopping happened on Tuesday and I was bummed because I couldn’t find most of the vegetables I was used to buying but loved the fact that supermarkets don’t hand out plastic bags.

Also, basmati rice costs more than 3 times of what we paid in Singapore. On Friday, President Park was impeached, on Saturday we went apartment hunting with a property agent named Elvis who looked 30 years old but was actually pushing 50 and thought that it was inappropriate to celebrate the impeachment of a country’s president even though the desired outcome had been achieved. On Sunday we sniffed out a cafe by Gontran Cherrier (his Kouign Amanns were to die for even in Singapore) and on Monday we applied for our residence permits at the Immigration office. Phew! 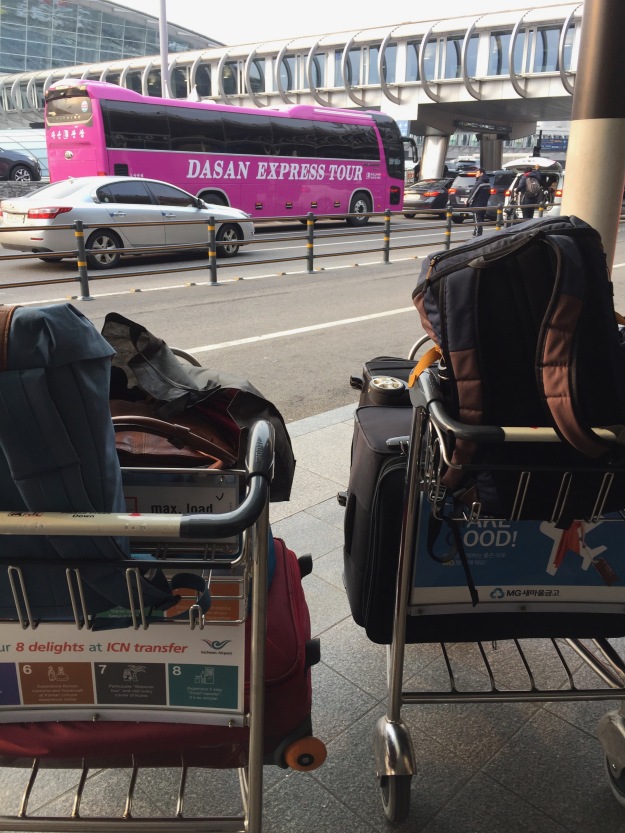 At Incheon Airport. We had so much luggage that it wouldn’t be fit into a regular taxi, so we had to hire a ‘van’.

There are still a million things to be done like finding an apartment, opening a bank account, getting a local phone number, applying for internet, finding an Indian grocery store that sells all the spices I use in my cooking and so much more which cumulatively may feel overwhelming but every time I sense my patience fraying I remind myself that we are doing exactly what we always wanted to do, which was to travel.

This fantastic service apartment is our home for this entire month until we find our own apartment. We have a kitchenette and the first meal I made after buying groceries was pasta Agilo e oilo!

To travel to a new place and make it home for a while. To explore and discover our new home. To experience all over again the full gamut of emotions from being surprised, shocked, disgusted, livid, bemused to being excited, joyful, exhilarated, inspired, happy and possibly a lot humbler than we were before (not necessarily in that order) as a result of those discoveries and explorations. It is akin to suddenly being apprised of the fact that you have a beating heart, although you had it all your life and never cared and feeling how marvellous that is! It is akin to feeling alive!

Oh! there will be stories to tell. And I know it’ll all be fun, just as my cookie predicted.