was the location of my first sketchwalk with the Seoul Urban Sketchers. I had been waiting for this day ever since we moved here and the countdown ended last Saturday when I hopped on a train from Gangnam and travelled all the way to one of the most prestigious institutions in the country, to meet a group of 20 sketchers who gave me the warmest welcome I’d ever received. 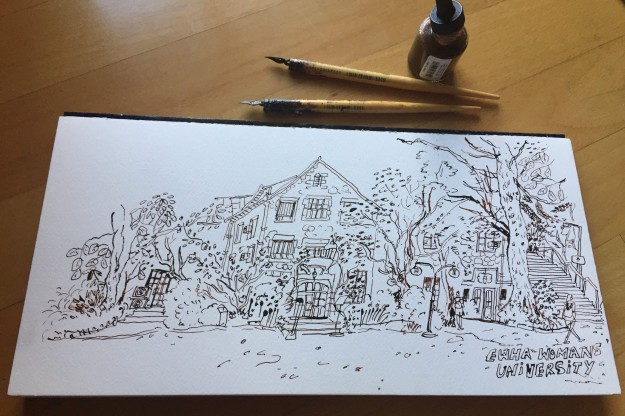 The thing about urban sketching, especially in a group like this is that it is one of the most enjoyable and unique ways to see a city and learn about it too at your own pace. It is also a great way to make the acquaintance of locals, hear their stories and view the place through their eyes.

If not for Dominick, a fellow sketcher who I met at the sketchwalk, I wouldn’t have known that the tree whose massive trunk I was gawking at was a ginkgo tree. We found it while scouting for suitable locations to sketch from, inside the arboretum-like university campus.

” They turn yellow in fall, don’t they?” I asked Dominick, pointing to the fan shaped leaves. I had seen pictures of golden ginkgo-tree lined streets on the Internet and couldn’t believe I standing before something that was capable of turning into such surreal beauty later in the year.

“Yes, but did you know that the female tree produces a nut that is extremely smelly? It’s a nuisance!” he said.

I did not know that! A little research back home revealed that there are 114,000 ginkgo trees in Seoul and one in 10 are female and the nuts they produce are nutritious and tasty when cooked, but the butyric acid in their husk produces an offensive smell. Some say it stinks of vomit, others say it smells like rotten cheese! I read that the city employs over 400 people to wipe the streets and the sidewalks clean off the pungent ginkgo nuts.

“So is this tree a male or a female?”, I asked Dominick but he didn’t know.

A short walk from the ginkgo tree brought us to this charming stone Gothic structure nestled in greenery . The sky was a cool blue and except the sound of breeze rustling through the leaves and chirping of birds, it was really quiet. It took me about 40 mins to finish the line work using a dip pen and ink.

I coloured the sketch later as I had to rush off to a book club but not without the burning desire to revisit the campus again in autumn if not before to determine the gender of the first ginkgo tree I met.