are the ones that keep me occupied for hours. If you’ve read my earlier post –  Had people watching – you must be aware of my penchant for practicing flânerie, especially at cafes and how I channel my people watching / observation skills into making art. 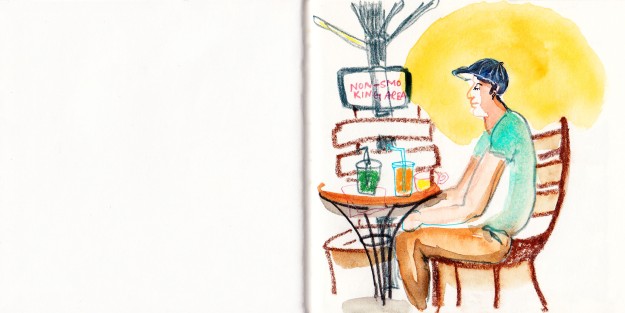 Just a guy alone with his coffee savouring a quiet moment

So far it’s been fun! Sketching is a mindful exercise and extremely gratifying, but sketching people is enlivening. There isn’t a moment of dullness or monotony because no two people you sketch can be alike. They differ not just in their attire and mannerisms but also in their interaction with/reaction to their surroundings. 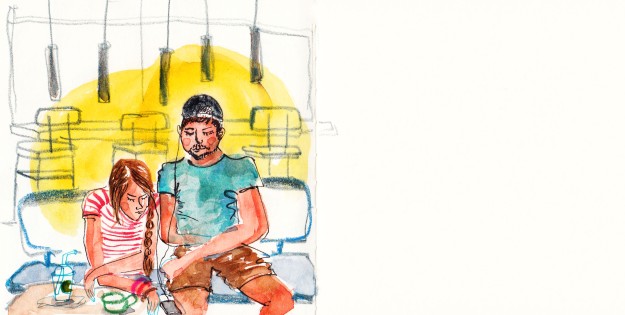 This couple started out acting all lovey-dovey, listening to the same music, leaning on each other, holding hands and then everything went downhill from there in the next 10 mins until one of them stormed out. Ah, the capriciousness of love.

These people captured in my sketchbook can be generically labelled as say, the coffee drinkers of Singapore because that’s what they’re technically there for but that’s not the only thing they do or if you’re observant enough, that’s not the only thing you see them doing. I once sketched a chain-smoker with a lot of swagger sipping coffee and blowing smoke into the ‘No smoking ‘ sign right next to him. 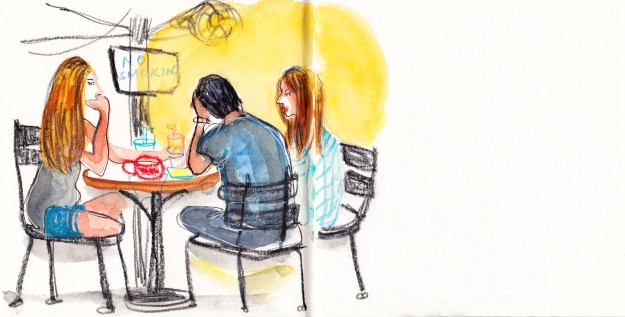 Two very fashionable ladies and a guy sitting in between them with hand on his head. One of the women was ranting in Japanese and the two were mostly zoned out, I think.

That same week I had also sketched a girl who was part of big group that ate and drank quite liberally at the cafe but right before leaving she was the only person who cleared every bit of trash on their messy table before walking out.

This bunch of pimply faced boys were from Anglo Chinese School and were studying ‘O level Topical Physics’ at Starbucks. They were all plugged in to their phones, swinging shoulders from time to time and sipping Macha lattes. These surely are different times!

With each sketch I get to peep into a stranger’s life for few minutes and capture them living an ordinary moment which otherwise would have gone unnoticed, unaccounted for. For example the Chinese grandma wearing jade bangles and a frumpy top on what seemed like her first trip to Starbucks was another fun subject to sketch. 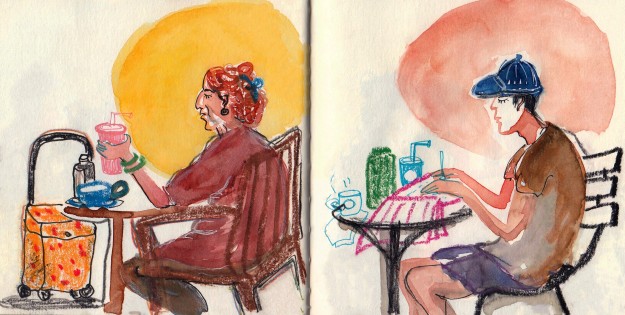 (L) This cute grandma had a strident voice, a blue clamp holding her red hair and jade bangles around her frail wrists. From the way she surveyed the place and the patrons sitting around her from time to time and inspected her cup of latte, it seemed like her first time here at our neighbourhood Starbucks. Don’t miss her colourful shopping trolley!

She looked out of place and excited at the same time to be holding probably her first cup of latte in her wrinkled hand. She may never know this, but 2 meters away I was touched to have witnessed that moment and document it in my sketchbook. 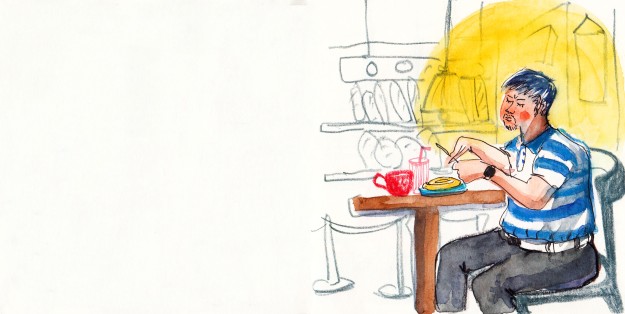 It was really hard to believe that this guy was eating Tiong Bahru Bakery’s Kouign Amann ( which by the way is top notch) with such indifference.

All sorts of students, specially pimply restless school students plugged in to their music sipping frothy matcha latte are common sight at the local Starbucks and always make great subjects for drawing. 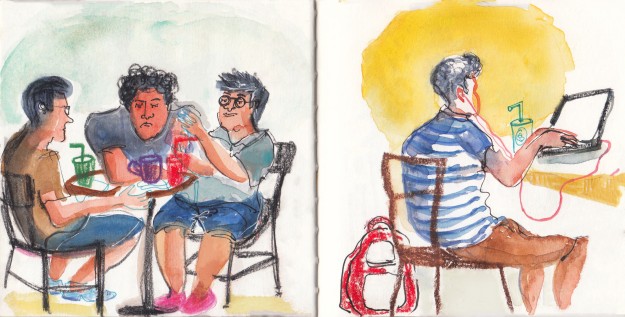 (L) – Serious discussion taking place. The guy in the centre doesn’t look amused and kept quiet through the entire conversation.

You see them day and night hunched over a pile of books, fervently highlighting something or the other with coloured markers on their notebooks with their laptops open on the side. This subculture is unique to Singapore, something I haven’t witnessed in any other country I’ve travelled to and therefore having them in my sketchbook is also special. 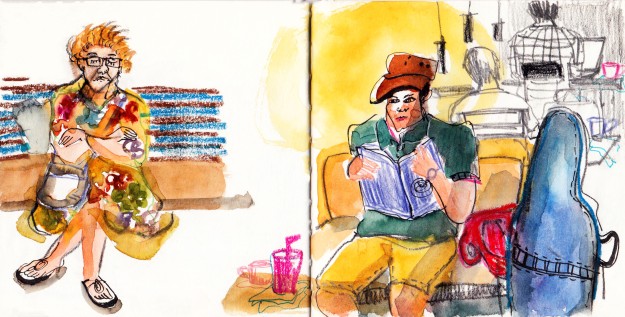 (R) The rare sight of someone reading a physical book and then looking up to think about and then reading again. That’s an indie comic book in her hand and a guitar by her side.

It’s hard to imagine that only three months ago I had this incredible fear of drawing people which I write about in the post What if and how I get over it and now have come to enjoy it because it feels as if for once I’m not rushing through life and letting it pass by me but consciously stopping to smell the flowers. 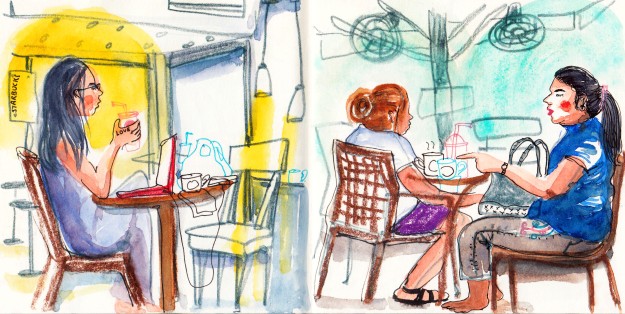 (L)- This woman had an impermanent tattoo on her hand. The word ‘Love’ written in bold with a glitter pen stood out and and yet seemed incongruous with her austere style. She was alone and seemed lost in thoughts. (R) – I spotted these two women on a late Sunday night. They were mostly gregarious but at one point I saw one of them point finger at the other in a menacing way.

Well, I don’t know where it’s going to take me and if anything will come out of this but as long as I cherish these little stolen moments and revel in the ordinary stories of ordinary people, I will continue to document them in sketchbooks and share with you. Hope you can stop by! 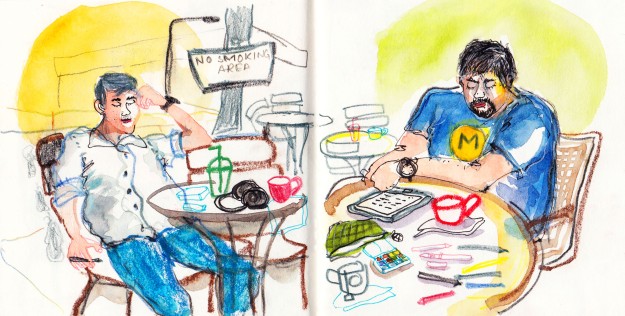 (L)- A chain smoker with a lot of swagger. He didn’t care about the ‘No Smoking’ sign next to him; (R)  – My husband reading ‘Harry Potter and the Cursed Child’ on the day it got released.

2 thoughts on “Things no one sees”