Last week while lunching with my sketcher pals at Tiong Bahru Hawker Center, I had two new additions to my ever expanding knowledge of local dishes.

I was ploughing through a plate of noodles topped with roasted pork slices and a bowl of clear soup with light fluffy wantons floating on the surface when Paul landed a plate of Chwee Kweh and a bowl of cooling Cheng Teng on our table and said, “try these”. He seemed rather pleased and glanced over his loot with such undeniable sense of achievement that I wondered if mountains were moved and demons were slain to win these back from the dragon’s den! Pretty close actually, considering the heat, humidity and long lunch time queues he must have endured to score some of this hawker center’s best offerings. 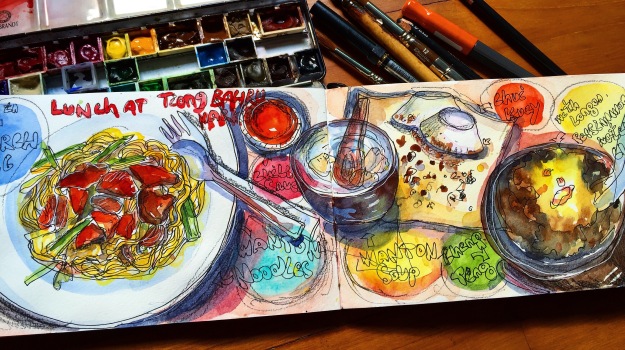 Chwee Kweh, a white muffin shaped item (top right on my sketchbook) is a kind of steamed rice cake which was served on waxed paper and seemed bland by itself but when eaten with the salty, garlicky preserved radish relish, it hit all the right notes. “It’s a very popular snack in Singapore”, said my friends understandably when they saw me stealing second, third..fifth helpings. I managed a muffled “mmm…hmm” in between mouthfuls. They withdrew their chopsticks gently and let me finish every last bit of it.

Cheng Teng, sketched on the bottom right wasn’t an instant hit, maybe because I’m not big on desserts but what won me over eventually were its mild sweetness (from rock sugar) and cooling nature. The dish looked like brown frozen soup in a glass bowl filled with a slew of goodies known to have health benefits like gingko nuts, dried longan, winter melons, dried persimmon, sago, barley pearls, red dates and such, making it a dessert that you can sip and chew and have fun with, apparently. Paul kept asking me to dig deep with my spoon to scoop up the dried fruits along with the frozen soup and every time I did, we checked what was unearthed. “Look, persimmons.. there, get the water chestnut, quick! Aw.. it slipped. Try again”.