1st January 2015 : Sydney to Christchurch –  As you can see from my sketch I started the year with a tall glass of promising ‘Green and Lean’ juice at Lumiere Cafe on Bourke Street. Five seconds later, a massive portion of Egg Benedict followed. New Year resolutions be damned.

To work that off we voted for a walk from City Hall to Sydney Opera House and see the iconic building one last time. What seemed like a great idea, gradually lost its appeal as the day became hotter. Most shops were closed and there were understandably few people on the streets after last night’s revelries, making our stroll even less fun. The chilled passion fruit smoothie at Starbucks saved me from passing out before the flight.

Sydney to Christchurch / 1st Jan : Picking up Charlie from Christchurch airport was the only highlight of the day.

And then – Kia Ora New Zealand! We picked up Charlie, our rental car from Christchurch airport around midnight. John Steinbeck may have something to do with my naming our red Toyota Corolla. Charlie’s Odometer Reading showed : 43300Km at the time of pick up. I kept a record of the readings on my sketchbook to gauge how much we drove each day.

2nd January 2015 : Hanging out in Christchurch –  The scars of the 2011 earthquake, were prominent on Christchurch. Vast spaces lay bare in between buildings. We walked past piles of rubble, damaged structures, collapsed, stripped to the core with iron rods sticking out of them. It was heartbreaking especially the plight of the 100 plus years old Christchurch Cathedral. Outside these cordoned off areas containing the wreckage, the story was one of resilience and hope.

The Re:start mall seemed such a beacon. Everything from food, carpets, sweaters, shoes, clothes, souvenirs and kiwi knick knacks were sold from inside of colourful shipping containers! We shared a bench with a family from Wellington and sipped lemonade right in front of a bright red metal box that had become the home for Scorpio books.

Christchurch / 2nd Jan : We had dinner at Indian Sumner, an Indian restaurant at Sumner. After surviving on Egg Benedict, Fish and Chips, sandwiches, wraps and burgers for days, a slice of home felt heavenly.

If there’s one place I’d like to return to in Christchurch, it would be the Risingholme garden, inside the Botanical garden. The serenity of nature, the meditative silence and the feeling of being minuscule, inconsequential amid the giant oaks, cedars, beeches and Spanish chestnut will remain special. I flitted from one tree to another, hugging, smelling, caressing their massive trunks, finally settling under the shade of Cedrus Atlantica, from where this sketch was done.

In the evening, Charlie drove us to Sumner – a pretty seaside suburb of Christchurch, about 12 km away. We watched a dramatic sunset and walked on the long beach in the golden light, listening to waves violently crash against the jagged rocks. It was cold, so we huddled up close to each other and held hands. For a little while, the poignant reminders of a brutal calamity writ large upon Christchurch was forgotten.

3rd January 2015 : Onwards to Lake Tekapo  – Black Betty, a stone’s throw from Southwark Apartments, was open for business, post new year. We were among the firsts to show up. The gothic accents were interesting but thankfully not overpowering for detractors. The hot chocolate and blueberry muffins lived up to the great reviews.

But we didn’t want to fill up because our next stop was Lyttelton Farmers Market, in the port town of Lyttelton, about 12 Km away. I was so enamoured with Sue’s marinated olives that we spent an inordinate amount of time at her stall. It was very hard to turn away from the rest of her wares – semi-dried tomatoes, dolmades, marinated artichokes, several kinds of dips and hummus – everything fresh, fragrant, glistening and ready to eat! “I used to own a cafe there (apparently the legendary Volcano Cafe)“, she said pointing to her right. Then added “..but after the earthquake destroyed it, I do this.” Sue has developed the volcano brand of delicatessen food that she sells at various farmers markets.  After she helped me pick out 4 different kinds of olives, I sketched her little set up. She graciously signed her name under it, at my request.

Christchurch to Lake Tekapo / 3rd Jan : We were lucky to be able to experience something as local as a farmer’s market at Lyttelton. There were times when I wished I was a local just to be a part of their spirited community. Meeting the residents, chatting with them, hearing their stories and, watching them go about their business trumps any commercial tourist attraction. It felt real and authentic. And sketching seemed like a great way to start conversations and make friends out of strangers!

Walking through the market felt like gatecrashing a private party. ‘How’s your mother doing?’, “You looked great in that bikini the other day”, “Were you out of town?”, “Happy New Year!” were some of the snippets of conversation I heard been exchanged between the bread, mince pie, cheese, sausage, herbs, fruit and vegetable stall owners and their customers.

A band played slow music beside a cafe and the harbour across the street looked beautifully blue. Armed with a gigantic ( about 20cm in diameter) Focaccia bread that took us 5 days to finish, 100 gm each of herb and garlic cheese and my treasured olives, we forged ahead towards our destination.

The first sight of Lake Tekapo had us swooning over its terrific blueness. It was bluer than the bluest blue I had seen. Up at St. John’s Observatory, the air was so clean and transparent that the farthest mountains in the backdrop became visible, forming a soft undulating dark green outline in contrast to the stark and edgy blue foreground. For urban dwellers heavy-handed with photoshop and Instagram filters, this sight would be a revelation.

4th January 2015: Mount Cook bound – The owner of Glacier Rock B&B – our fantastic lodging (the view from the patio alone makes it worth the stay) in Lake Tekapo said to us at breakfast, ” I have a feeling that you’ll have a clear view of Mt. Cook today“. Apparently, it isn’t uncommon for the weather to turn without warning and for us that could mean losing our only chance to view the highest peak of New Zealand. Already the radio was abuzz with the news of the three missing mountaineers attempting to scale Mt Cook after the weather deteriorated. I hoped Mrs. MacLaren was right.

Lake Tekapo – Mount Cook – Omarama / 4th Jan : Peak of the day was dipping my feet in glacial water at the end of Hooker Valley Walk. And the bland under seasoned pea soup at Shawtys in Twizel has to be the slump of the day. Yes, it was worse than the 120$ speeding ticket.

After a short stopover at Lake Pukaki, the plan was to drive non stop to Hermitage Hotel, take in the famed view of the mountain from there, then start on the 4hours tiring yet spectacular Hookers Valley Walk that ended at the Hooker glacial lake. But the closer we got to the mountain, more compelled were we to make random roadside stops just to adjust our senses to the beauty unfolding. Unsullied nature at such a grand scale was a lot to take in. It was humbling to stand on that listless road snaking feverishly though a sweeping landscape of massive forbidding mountains surrounding us, rising from the ground like mighty waves.

The day ended at Omarama – the starting point of our ‘gold heritage trail’.

5th January 2015 : A long winded route to Dunedin – There is of course a straightforward and quicker route to Dunedin which we did not take. Relaxing is something we forget to do on holidays. Instead we carved out a day long plan to drive through the preserved goldrush towns of Cromwell, Clyde, Alexandra, St. Bathans, Naseby, Ranfurly, Middlemarch and finally to Dunedin, that claim their origins to the discovery of gold in 1861. 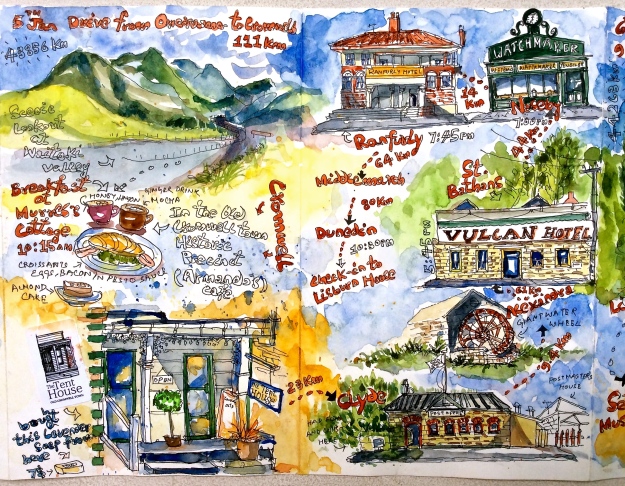 Otago’s Gold Heritage Trail/ 5th Jan : I got myself four souvenirs from this trail and none of them was gold. I picked a ‘Lavender, Lime and Spice’ soap bar from Cromwell, a maori dolphin tail locket made out of bone from Clyde, a tacky fridge magnet from Alexandra and a sticker for my diary from St. Bathans. I cannot bring myself to use the soap. For now it perfumes my study table.

The historic precincts in each of these towns being pedestrian, it’s easy to slip back in time just by walking past the retro architecture. Art galleries, restaurants and cafes are housed in some of these establishments. Some act as museums, some sell handcrafted soaps. But together they exude a cute picture postcard beauty and nostalgic charm that made the detour every bit worthwhile.

6th January 2015 : Touring Dunedin – Except Omarama, where our lodging didn’t turn out as expected, I did a pretty good job in finding unique accommodations on this tour, the creme de la creme being Lisburn House in Dunedin – a stunning 19th century Victorian property turned into B&B that will feed your fantasy of living as a member of 19th century English nobility.

I spent a ridiculous amount of time at the Otago Settlers Museum. Not because it was hot outside and I needed the shelter, but because it was of the best curated museums I had visited – one of those educational establishments that believes in telling a compelling story through its exhibits, encouraging its viewers to join the dots instead of spoon feeding them.

Dunedin / 6th Jan: We woke up in a Victorian dream home, toured a chocolate factory and climbed the world’s steepest street, all in one day. Pretty productive, I’d say!

After romping about the city some more, we drove 70 Km to see an unique geological sight that had intrigued us ever since we saw its pictures. Moeraki Boulders seemed like gigantic concrete cannonballs randomly lying on the beach, some in clusters, some solitary. There were deep cracks all over their surface, like some sort of design. Some boulders were intact, whole – people climbed over them and took pictures, while others lay cracked open like an egg shell, with fragments scattered all over the sand.

At sunset, the tip of the boulders became golden tinged. The waves crashed against their smooth bodies, trying to pull them in, but failing and sliding off the sand around them instead. It was hard to make sense of their existence, but that was a good thing because it’s better to be curious than blasè. Isn’t it why we travel?