Moscow’s architecture is awe-inspiring, art galleries, resplendent, churches opulent, parks vivacious and metro stations so grand that they have to be seen to be believed. To top it all, the city is big, vast, enormous, sprawling. In short, overwhelming for a first time visitor, who is unaware of its dimensions till she is dwarfed by almost everything around her.
When overwhelmed, draw a map – that’s my advice. It’s therapeutic, it simplifies everything and it gives the control back to you.  I always like to draw myself a rough map of the city I am travelling to, mainly to gauge the location of the sites I’d like to visit and their distance from my hotel. Turns out, if you walk straight on Ulitsa Tverskaya, that hits the red square in a tangent, you are all set to visit the major sights and get a hang of the city on the first day. Passing gigantic buildings, abnormally big arches that gain entry to such buildings, bronze statues and enormous squares like Tverskaya Ploshad, we reach the epicenter – Red square in about thirty minutes from Mariott Tverskaya, which is a hop skip and jump from Belarussky metro station, making it a great choice for lodging in Moscow. 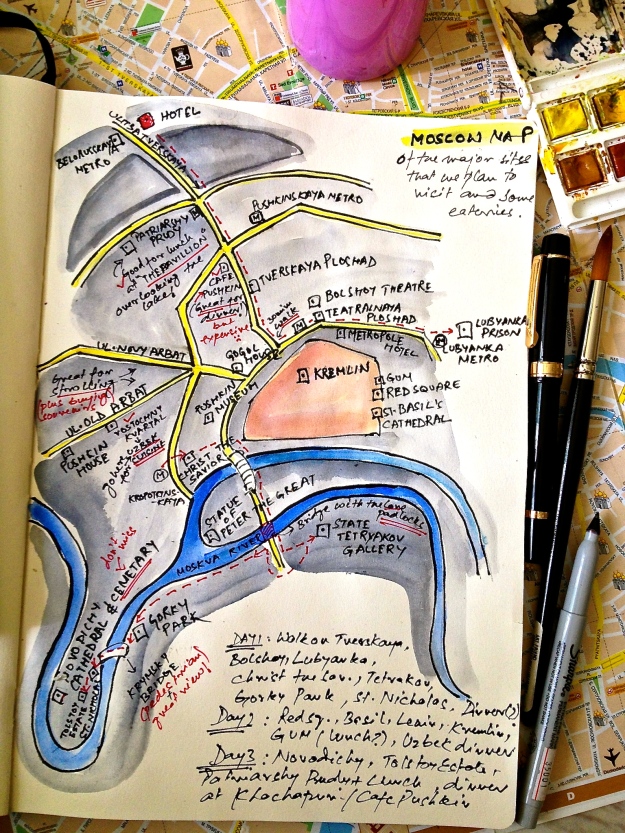 Instead of heading straight, we turn left to view a historic cultural jewel of the 19th century – the Bolshoi Theatre, that has been getting a lot of bad press lately post an acid attack earlier this year, on its ballet director by a hitman hired by one of its dancers. Scandalous inside job maybe, but on the outside, this eight colonnaded opera and ballet theatre with a bronze quadriga looks imposing and shines a golden-yellow in July’s afternoon sun. An expensive six-year overhaul has returned it to its Tsar era splendor. Perched on the wooden benches facing the fountain in front of the theatre, are scores of people, gazing at its majestic beauty. Many take photographs but it’s not easy to fit it in the viewfinder, unless you back up quite a bit.
Not even an hour old in Moscow and I am compelled to pull out my sketchbook.

Away from the Tverskaya, we keep walking left and cast a passing glance at the diagonally opposite –  luxurious Hotel Metropole and a little ahead, the Lubyanka Building , which served as the headquarters of KGB.

Wedding couples posing in front of Cathedral of Christ the Saviour

Taking the metro at ‘Lubyanka’, we emerge at ‘Kropotninskaya’ (3 stops on the Red line) and are instantly rewarded with the splendid view of Cathedral of Christ the Saviour, along the banks of Moskva river. Get one of those chocolate coated vanilla ice creams on stick – the summer totem of Moscow held and licked by every Russian in sight – to celebrate, because you’re now one among the 9 million commuters, who brave Moscow’s metros daily.

I murmur a hesitant ‘Dasvidaniya’ (Goodbye!) to the grim ice cream lady, while walking away and she flashes an iridescent smile – two gold teeth standing amid few rotten ones, glitter in the sun like the onion domes of the cathedral itself. A stretch limousines is parked on the kerb. The bride and the groom step out with flute shaped glasses in hand, toast with champagne and kiss blissfully.

We watch their merry-making and follow them inside the cathedral. If the interiors don’t hold your fancy for long, step out and head to the beautiful footbridge on the other side of the church and start walking away. The further you walk away, more irresistible it looks. Facing the cathedral, you can spot Kremlin on your right and the unmissable giant bronze statue of Peter the Great on your left. If the photographers hanging about the bridal couples and the endless tour groups spare you some space on the bridge, take a picture with the church in the background.
With such visual treats around, who has time for a sit down lunch. We settle for a snack sold by a babushka on the sidewalk. The spread of sandwiches, breads and puff pastries neatly laid out on the table may have been most delectable and the freshest, but if you ask me, it’s hard to choose when you’re clueless about the filling. I turn to the bearded local next to me and ask if he speaks English. “Oh! Yes”. “Can you ask her, what that one is?”. “But I don’t speak Russian”. He is from Berlin. Good to know. We buy our puff anyway. “Enjoy your surprise!” says the Berliner. Tuna and cheese filling was the surprise that we gobbled up before walking into the Tretyakov State Gallery, to enjoy Russian fine arts, including several masterpieces. If you’re fond of landscapes, don’t miss Isaak Levitan’s work.
Exiting the gallery, you hit Luzhkov bridge over the Vodootvodny Canal, beautiful and teeming 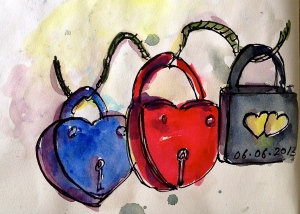 with bridal couples engaged in the de rigueur – sipping champagnes, kissing on cue, holding precarious poses for the photographer, flying white doves and fastening love padlocks with their names and vows inscribed. Countless locks in every imaginable colour, shape, sizes (some bigger than my head), hang from the iron trees that were built on the bridge for this very purpose.

At 8 in the night, the sun doesn’t show any sign of descent. So, we head towards the nearby Gorky Park to unwind but instead make several pit stops in between because what seems right under your nose on the map is actually quite a distance away. Cafe Parco serves us the last item left on their menu – fresh banana and strawberry smoothie in sealed plastic bottles.

Sitting on garden chairs and resting our tired legs at Cafe Parco while their music band is getting ready to play.

Nothing under the Moscow banner is ordinary or average in its dimension or architectural style – is the wisdom gained at the end of day one. Standing in front of the massive gate of Gorky park, once again we feel puny, ant-like, inconsequential. 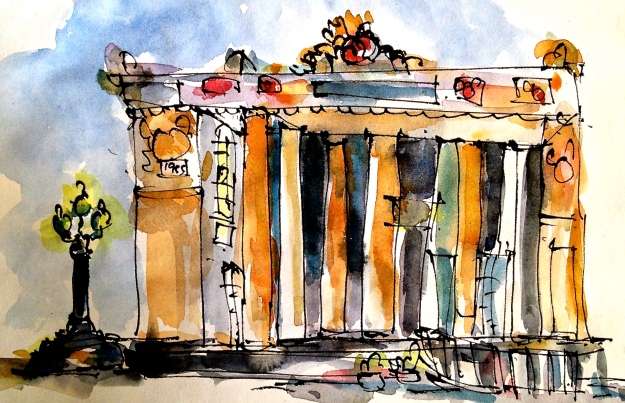 But the atmosphere is electric. Loud, thumping music is gushing out of a concert in progress. Hundreds of people of all ages are engaged in every kind of sport/recreational activity in this 300 acre park, either playing table tennis, badminton, or riding Segway, rollerblading, bicycling, throwing frisbee, rowing in the lake or just sunbathing.

Children in prams are licking lurid pink cotton candies while their parents are lining up at the ice cream or hotdog counter. The smell of hot corn on the cob slathered with butter and salt gets me brisk walking towards the stall in a blink. Couples and families are lounging on communal bean bags under enormous trees. And right at the center, is a grand musical fountain that’s spraying water to the beats of an orchestra. The sun isn’t going anywhere and Moscow seems golden through my tinted sunglasses.
How do you tear away from all this? We do because, just across Gorky Park, on the other side

Church of St. Nicholas of the Weavers

of the river, sits another magnificent church that supposedly rivals St. Basil’s on Red Square in its beauty. Church of St. Nicholas of the Weavers , a late 17th century parish church for a weavers settlement, is a stunner all right with its onion domes and a tented bell tower, but we arrive when the evening service has ended and the church is about to close.

The orthodox priests in somber black cassocks are conferring on the church grounds, women are quickly removing their headscarves and leaving and families are bidding goodbye to each other. I cover my head and manage a quick peek inside the church and a hurried sketch before being ushered out.
Just outside, a signboard says, Leo Tolstoy’s house turned museum is only 400 meters away but we resist the temptation and reward ourselves instead with these juicy chicken shashlik for dinner. 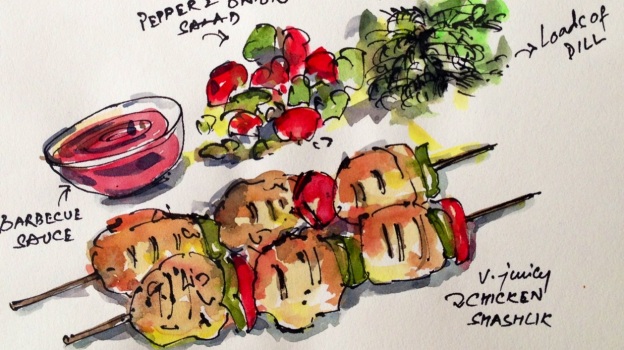 Chicken Shashlik with salad and a truckload of dill